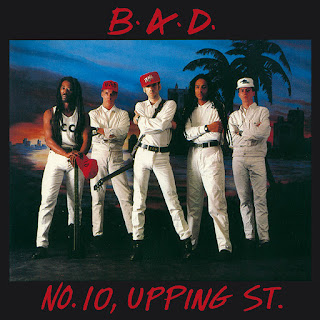 In preparation for my next Top 10 list for Toppermost, I'm taking a trip through my old BAD albums. And while Mick Jones' post-Clash music was far more interesting than that of his former bandmate Joe Strummer, my current lookback is also a reminder that later albums grew a bit spotty (though Jones could still be counted on for some killer singles). But those early BAD albums still hold up great.

The debut, This Is Big Audio Dynamite, was a fresh blend of rock, pop, and dance music, riven with samples and hip-hop elements that were still pretty novel (at least among white artists) at the time. For the follow-up, Jones surprisingly reunited with Strummer (whose final album with the Clash was something of a disaster, so it almost felt like an act of charity). Despite the mini-Clash reunion, with Strummer co-producing and co-writing half the album, Upping St. eschewed a return to the Clash's guitar-oriented rock/punk sound and firmly retained BAD's dance-pop orientation, a logical successor to the debut with Strummer remaining off-mic.

Opener "C'mon Every Beatbox" kicks things off with a shake-your-ass call-and-response dance anthem, driven by electronic beats and Clash videographer Don Letts' well-deployed samples. And the rest of side one just gets better from there: "Beyond The Pale" is a mid-tempo pop track extolling Jones' immigrant roots, an unusually poignant tune that calls back to Jones' wistful "Stay Free" from his Clash days; "Limbo The Law" reprises the percussive dance-beats of "Beatbox"; "Sambadrone" is a wickedly insinuating piano-based ditty, as lyrically striking as "Pale" but with a distinctively original electronic drumbeat; and "V. Thirteen" again shows off Jones' restrained pop chops.

The second half of the album can't quite sustain the momentum, but overall the record remains a terrific and somewhat overlooked gem in the Clash/BAD canon, an early dance-oriented Britpop record that was a few years ahead of its time. (I still remember when acts like EMF and Jesus Jones started getting MTV airplay, and wondering why BAD didn't get more credit for clearly originating those grooves.)

...and "Sambadrome":Here's a live performance of "Beyond The Pale" from a 2011 reunion show: