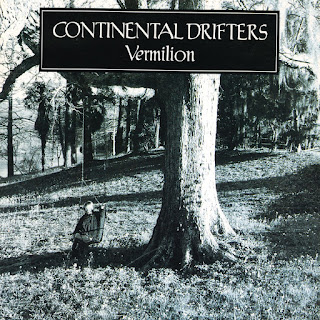 Continental Drifters were a sort of jangly Americana-pop super-group, a band that never got a lot of national attention even though one spin of this will have you scratching your head and wondering how that could be.

They started out as a bluegrass-flavored country rock band in LA (Los Angeles, but later Louisiana), but following an unreleased initial album (finally seeing daylight) much later, they shifted gears by adding three interesting players to the mix: Peter Holsapple of the dB's, his then-wife Susan Cowsill (who as a child had been in the Cowsills, the singing family that famously served as the model for the Partridge Family), and Vicki Peterson of the Bangles. This incarnation of the band recorded three LPs between 1994 and 2001; Vermillion, my personal favorite, was the middle one.

While a number of band members contribute songwriting and vocal duties, I'm partial to the Cowsill and Peterson tracks. Cowsill reminds me a bit of Lucinda Williams, a passionate country crooner who wears a well-worn history in her voice; while Peterson adds a lighter pop touch familiar from her Bangles days (though she can rock a road-weary groove equally well). And when they pair up for harmonies, it's pretty damn heavenly.

A lot of great stuff here. Opener "The Rain Song" sounds like a long-lost Lucinda Williams classic, but backed by the Bangles; "Way Of The World" is Paisley Underground jangle pop; "Christopher Columbus Transcontinental Highway" is a rousing boogie for the road. "Watermark" does a particularly nice job of infusing middle-of-the-road pop with some bluegrass-tinged solos. And while the bulk of this falls in sort of a twangy Fleetwood Mac zone (an analogy that became particularly apt when Holsapple/Cowsill broke up), they mix it up a bit, like on the bracing cowpunk of "Don't Do What I Did."

Beyond the three albums, there was a 2-CD comp a few years ago that gathered some early (more country-oriented) tracks without Cowsill/Peterson as well as some later covers and live tracks (notably some terrific takes on "I Want To See The Bright Lights Tonight" and "When You Dance (I Can Really Love)." Surprisingly, all of their stuff streams on Spotify, so check it out.

Here's an audio rip of "Way Of The World":