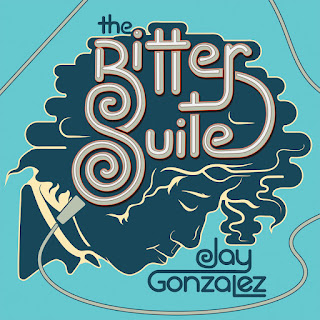 Singer/multi-instrumentalist Jay Gonzalez has been playing with the Drive-By Truckers since 2008. But you'd never know it from the smattering of solo releases he's issued over the past decade, which sound nothing like the Truckers' darkly uplifting, progressive-minded Southern Americana. Instead, Gonzalez embraces the Brian Wilson-indebted sunshine power pop of artists like the Wondermints and Linus of Hollywood, buoyant melodies and lush, McCartneyesque production.

He's got a new one that just came out called Back To The Hive, and you should definitely snag it... but I thought I'd post 2015's Bitter Suite EP instead. At 5 songs in about 13 minutes, it's more like a maxi-single than an EP, a brief suite of segued songs, and it's just great: Relentlessly catchy baroque pop blending those Wilson-like acts with some 70s McCartneyisms and the tricked-out revivalist pop sounds of Elephant 6 bands like the Apples in Stereo and Olivia Tremor Control. It's over before you know it, a mad rush of sun-kissed pop that sends you back to cue it up one more time.

You can buy it on Bandcamp.

Here's a live performance of the whole suite: