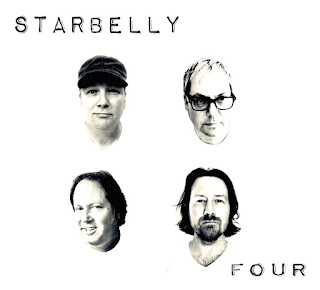 Starbelly were a fine, largely under-the-radar power pop band from the late 90s/early 00s, right in that sweet spot for folks who like Sloan, Jason Falkner, and particularly Myracle Brah. They released two LPs before parting, with co-frontman Cliff Hillis continuing to release terrific music on his own. They regrouped a couple years back, their sound pretty much unchanged, the production just a bit shinier and more up-to-date. (The title confused me into wondering if I'd missed a release along the way, but it's the four-piece's third album.)

The power pop touchstones are there--jangly/fizzy guitars, warm harmonies, rousing hooks and melodies. Lots of earworm nuggets to be found, like the infectious mid-tempo sweetness of "Lay Low" (shades of Fountains of Wayne here), the crunchy guitar rock and Beatlesque la-la-las of "The Stars of Constantine," the wonderfully melodic "Yes, I Love Her Again" (with a guitar line that reminds me of the Bats' "Mid City Team"), and the ridiculously catchy, Squeeze-like "Jesus Freak." There's even this weird multi-part suite called "Danny Opus" that feels like a quick run-through of various 70s power pop forerunners like Todd Rundgren and the Raspberries. And with two singer/songwriters sharing the helm (Hillis and Dennis Schocket) there's enough variety to avoid the sense of sameness that pervades some power-pop long-players.

Really great stuff all around. You can check it out at Bandcamp.

Here's an audio rip of "Yes, I Love Her Again":