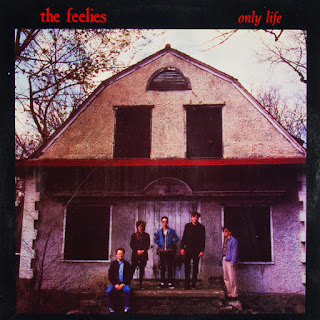 I realize that Spotify (and streaming media generally) gets a bad rap in the music world. Payouts to artists are criminally deficient, and then there's the whole debate over tangible vs. digital music. Me, I still like to own the physical album, even if I immediately rip my CDs to a digital library and rarely touch them again. It's just part of growing up in the 70s and 80s and holding on to that emotional need to personally "own" my music.

But I also enjoy the Spotify service, which allows me to listen to music on the go without lugging my iPod around, and to share music with friends and fellow online music nerds -- i.e. through this blog. So it bugs me when some of my favorite albums/artists are still absent from streaming media. Sure, even those artists whose work is relatively complete online have omissions, the b-sides and live archive releases and the so on which ensure that streaming media will never replace a good old-fashioned music collection for serious fans. But for some artists, there are gaping holes, key albums or even a complete absence of the artist from Spotify. Here are a few I find particularly galling; I'm sure you have your own examples.

Rainy Day were a one-off "supergroup" made up of members of various 80s Paisley Underground bands, including the Bangles, Rain Parade, the Three O'Clock, and Dream Syndicate. Their self-titled 1984 album was a real treat, offering sparse, casual covers of bands like the Who, Velvet Underground, Big Star, and Buffalo Springfield. Notably, a few of the groups who contributed to the Rainy Day recording have some big holes in their own online discographies as well: Rain Parade's albums aside from their debut are absent, as are the works of Opal, the pre-Mazzy Star dream pop outfit comprised of David Roback of Rain Parade and Kendra Smith of the Dream Syndicate. (Roback's recent passing will presumably keep these albums offline, unfortunately.)

This New York band was one of my favorites of all the jangly guitar college radio bands of the 80s. Beautiful, folk-tinged rock songs paired with singer Joe Marques's gorgeous vocals made for some timeless music that never made the splash it deserved. Their final, self-titled album does stream, and it's not bad, embracing a more Americana vibe; but their stunning early work is entirely absent. And, again, the untimely passing of both Marques and guitarist Micahel Carlucci makes it unlikely this music will see light of day.

The Reivers were another fantastic jangly 80s band, originating from Texas, an early Americana-oriented act that merged southern twang with the post-R.E.M. Byrdsy guitar sound. They had 4 albums, all great, and none of them stream. They briefly reunited awhile back, but their new music is also missing, and their brief return, alas, did not result in their older work being unearthed for Spotify.

The bulk of the Feelies' work is available on Spotify, most notably the band's first two (perfect) albums, as well as their more recent post-reunion work. But the final two records from their initial four-record run remain missing in action. Both are fantastic, 1988's Only Life revisiting the pastoral jangle of 1986's The Good Earth, and 1991's Time For A Witness mining a more electric, Velvet Underground-derived sonic palette.

Another Paisley Underground act from the 80s, much less well-known that their peers, who shared Rain Parade's flair for shimmering, updated 60s psychedelic nuggets. They had three albums, and 1986's Outside My Window was particularly fantastic, offering truly wonderful pop melodies and psych shadings that deserve more than their long-out-of-print status.

The shoegaze masters finally got a nice Spotify upgrade a few months back, with the lion's share of the MbV catalog now streaming. However, their early material, when they sounded more like a jangly Paisley Underground psych band just starting to filter in some of their trademark buzzsaw sonics (captured on the early comp Ecstasy & Wine) has yet to be reissued or released to streaming media. It's not the most essential music--a far cry from the stunning Isn't Everything and Loveless--but still some nice tunes most fans would be interested in hearing.

Part of the late 70s skinny tie crowd, the Jags offered a blend of power pop and mod revivalism, hitting the sweet spot between the Jam and early Elvis Costello and Joe Jackson. The single "Back Of My Hand" is a true classic of the era, but they had plenty of other great tunes, none of which can be found on Spotify.

One of the few latter-day artists with a spotty online presence, Lovers had a few albums in the 2000s full of gorgeous, ambient dream pop that called to mind Mazzy Star and the Cocteau Twins; 2002's Star Lit Sunken Ship in particular is fantastic from start to finish. They later evolved into a more dance-oriented electro-pop act, and while those later albums do stream, I'm strictly a fan of their first three records, atmospheric and gauzy and nowhere to be found.

I've written about my soft spot for obscure 70s rock. Not surprisingly, a lot of it is long out-of-print and doesn't stream. Yet while Vinegar Joe isn't exactly a household name, they had three pretty decent records blending blue-eyed R&B, funk, and traditional rock & roll; they also sported a charismatic frontman in a pre-fame Robert Palmer (as well as Elkie Brooks, who had a lot of solo success in the UK), but that serious pedigree doesn't translate to online availability.

There are a lot of great power pop bands that get passed over by streaming media; one of my favorite is Beagle Hat, more of a mildly-psychedelic Beatlesque baroque pop band, with complex and kitschy (almost proggy) tunes ideal for fans of Jellyfish and later-period XTC (and XTC side-project Dukes of Stratosphear). They're an odd little project, a Japanese power pop band fronted on record by David Paton, singer for 70s one-hit-wonder Pilot ("Magic"); but the pair of albums they released in the 2000s are truly great and impossible to track down.