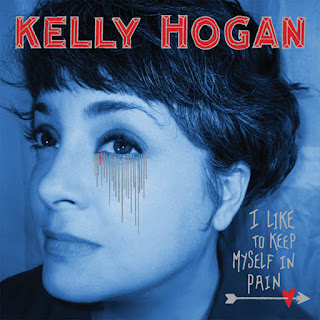 Kelly Hogan makes country music for those of us who wouldn't be caught dead listening to country music. Like Neko Case (with whom she has performed over the years), Hogan has a drop-dead voice that I'd listen to regardless of whatever songs she happened to wrap it around, and taste in material that, while cribbing freely from country, jazz, and singer-songwriter pop, avoids some of the sappier cliches that can drag down comparable artists.

Hogan got her start with 80s college radio band The Judy Grind, an unusual combo that mixed old-school Americana with eclectic jazz styles (sadly, their two records are out of print). Since then, she's intermittently released solo records; this, her most recent, is already nearly eight years old. And it's just lovely. Yes, there's that voice, right up there with Linda Ronstadt and Emmylou Harris and Neko in the upper echelon of classic American (and Canadian) vocalists. The songs (all covers, some of which I believe were written specifically for her, from the likes of Robyn Hitchcock, Magnetic Fields' Stephin Merritt, and the Mekons' Jon Langford) are a delightful mix of gorgeous torch songs, Americana, and traditional pop, though with less straightforward country twang than some of her prior work. It's grown-up easy listening music, the sort of album I'd have overlooked in my youth but nowadays just want to throw on the stereo and pour myself a bourbon as the night grows late.

It largely sticks to a mellow, midtempo groove, but there are some upbeat accents, most notably the swinging "Haunted" (penned by Langford) and John Wesley Harding's Bacharach-like finger-snapping "Sleeper Awake." In the mood for a delightful throwback to old-fashioned American music? Definitely give it a spin.

Here's a live take on "Haunted":

...and a performance of the title track: