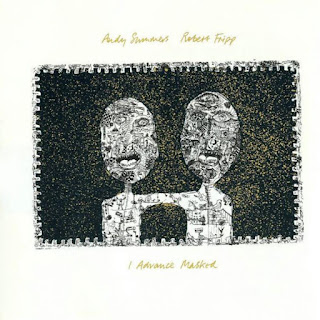 When this instrumental gem came out back in 1982, I was in the midst of my high school prog fixation, while still deeply enmeshed in the new wave pop music of the day. So this collaboration hit my sweet spot, blending the hypnotic guitar loops of King Crimson's Robert Fripp with the more contemporary synth-treated guitar textures of the Police's Andy Summers. It bears some of the hallmarks of Fripp's 70s collaborations with Brian Eno, with the trance-inducing ambient atmospherics one would expect; but with an updated 80s groove that draws from both participants, the familiar looping guitar riffs that would dominate Fripp's revived 80s iteration of King Crimson blending with the stylized guitar experimentation found on later Police albums (stripped of Sting's distracting presence).

A sizable chunk of this is ambient musical noodling, more atmospheric than song-based (which, as a fan of atmospheric musical noodling, is not a criticism). But there are some tunes that jump out, still instrumental and loop-based but also catchy and melodic, notably the upbeat title track, "Hardy Country," "New Marimba," and "China," all featuring the blissed-out Fripperies of the 80s Crimson LPs overlaid with Summers' guitar-pedal washes and frenetic soloing. So, sure, you could play this gently in the background as somewhat generic new age music elevated by the presence of a pair of technically proficient guitar geeks, but at least a part of it rises mere above mere backdrop, providing wickedly cool prog instrumentals that could've served as nifty b-sides for either Crimson or the Police.

Summers and Fripp reunited a couple years later for Bewitched, which is a bit more upbeat and arguably more musically interesting (particularly the poppy "Parade") but also plagued by some dated 80s production.

Like a lot of Fripp's solo work, this was out of print for awhile and didn't stream, but both Masked and Bewitched were recently reissued and can be found on streaming media as well.