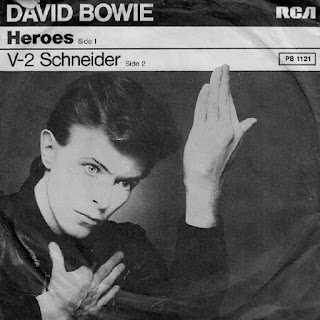 Like many kids in the '70s, my first real introduction to Bowie came through the almost-mythical ChangesOneBowie collection, released in 1976 and providing a pretty astounding overview of his earlier work. I worked my way through his pre-Changes albums and found much to love, especially Ziggy Stardust. Only later did I move forward to his more recent records (this was probably around 1978 or 1979, amidst the Brian Eno collaborations of his "Berlin Trilogy Era."

The public library had a copy of 1977's Heroes LP, so I checked it out and... did not like it. Opening tracks like "Beauty and the Beast" and "Joe the Lion" sounded a little abrasive and, well, weird to my young ears. And I had no patience for the ambient tracks that filled the vinyl's second side (I was still a couple years off from acquiring my lifelong devotion to Eno). Where were the poppy, glam rockers that had initially won me over?

But there was no denying that title track. Ok, fine, it didn't sound like his earlier stuff, but even as a pre-teen still strictly in power-chord mode, I was captivated. The strange, haunting wash of Eno's synths and guest guitarist Robert Fripp's trippy guitar loops--this is the second song on my list where Fripp's unique guitar elevates it to a whole new level--were hypnotic, making even the song's 6-minute running length (cut back for the single version) feel somehow inadequate. And the lyrics felt emotionally stirring, even if the vagaries of its Berlin Wall context were lost on me at the time.

45 years and countless listens later, I still get chills with every "We can be heroes, just for one day."