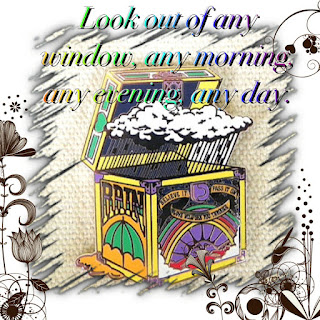 Second back-to-back song from 1970, and I'll admit it's a bit incongruous. As Dead songs go, it's kind of an outlier. It's one of just a handful of songs written and sung by bassist Phil Lesh who, let's be honest, has a singing voice not far afield from a sack of angry cats, but largely keeps that in check on the studio version. It also features a few guest musicians, while guitarist Jerry Garcia moves over to piano and Lesh trades his bass for guitar. So it's sort of a non-Dead Dead song, yet still quintessentially Dead. (Relatedly, the unique sound captured in the studio makes it one of a handful of Dead tracks I greatly prefer on record over live performances.)

While Workingman's Dead from earlier the same year introduced the replacement of the band's 60s psychedelia with largely acoustic Americana, "Box Of Rain" opens up American Beauty with an even bolder proclamation that the band has really locked in on the rustic vibe. The guitars shimmer and chime. Lesh's voice is relatively restrained, aided immeasurably by a few layers of harmonies. And Robert Hunter's lyrics are at their most poetic and cryptic--Lesh has noted how they capture the spirit of his father, who was dying of cancer at the time, but they're open to a wide berth of interpretation. "For this is all a dream we dreamed, one afternoon long ago."

Given its odd line-up, it's probably not on the short list of songs I'd use to try to win over a skeptic to Team Dead; but Judd Apatow's Freaks & Geeks made a strong case for the song as the best possible doorway.
File Under: 1970s All My Favorite Songs Americana Classic Rock Folk Grateful Dead Jam Band