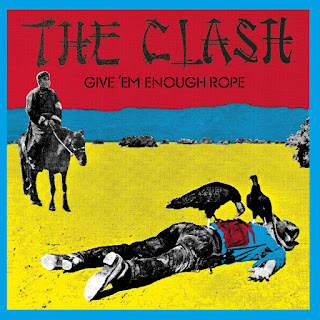 As noted previously, the Clash's 1978 LP Give 'Em Enough Rope had a mixed rep back in the day; sandwiched between the punk glory of the debut and the rock & roll perfection of London Calling, it was held out as a sort of hard-rock misfire. And while I think it's pretty great--c'mon, it the Clash!--it's not without flaws, particularly some of the heavier production.

But what an album opener! That single, resounding beat on the drum breaking into a basic yet riveting three-chord riff, as Joe Strummer launches into his tale of the band's visit to Jamaica gone bad, their naive vision of reggae's homeland giving out to "the place where every white face is an invitation to robbery." The mix of inspiration and horrified white privilege is a tense tight-wire act, held together by one of the band's catchiest and most rousing tunes. It's also one of the band's finest uses of dueling vocals, as Strummer's narrative bounces against Mick Jones' call-and-response "Where'd you go?" (and, later, in the coda, Stummer's rants are intertwined with Jones' sweetly beckoning "European home").

And just as the final coda seems to be fading--the refrain of "Rudie can't fail" prefacing one of London Calling's finest moments--and everything gradually disappears but for a lone guitar, the band comes barreling back, Topper Headon's tom rolls filling the room, only to grind to an unexpected halt. One of the most exciting few seconds in all of rock.