Boys With The Perpetual Nervousness: The Third Wave (2022) 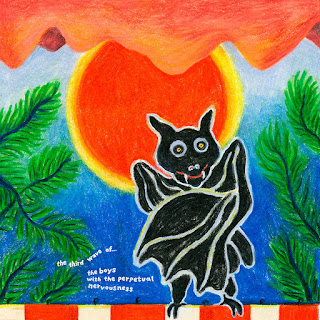 A quick plug for a minty-fresh new release that you're gonna love.

And let's face it; The Boys With The Perpetual Nervousness is a fantastic band name. But it's also a bit misleading, as the band sounds little like the Feelies song from which it cribs its name. Who they do sound like--and I imagine they're dreadfully sick of the comparisons by now--is Teenage Fanclub (circa late 90s). And the Cosmic Rough Riders. And maybe a touch of the Pernice Brothers.

The Scottish/Spanish band (as they're described on their Bandcamp page) offers warm and jangly power pop, a quick splay of infectious hooks, gentle vocals, soaring harmonies in the chorus, and all the usual touchstones of an endearing indie pop album. This one's their third, and while I've just started to go back and spend time with its predecessors, it seems fair to say the band is respectably consistent. They've got the formula for the winning 2:30 jangly pop song down cold, and why mess with a good (great) thing?

Ooh, and they even enlist one of my favorite singers, Mary Lou Lord, for a track ("Isolation").

Go buy it (and their others) at Bandcamp.