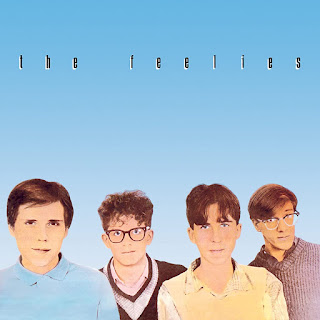 It was only after being introduced to the Feelies by way of 1986's phenomenal, Peter Buck-produced, pastoral jangly classic The Good Earth that I discovered their 1980 debut. And while my heart still belongs to Earth, Crazy Rhythms was nonetheless a revelation on first listen. Of all records, it's the nervous, nerdy, caffeinated jitter of Crazy Rhythms that probably best captures the ethos of my taste that an old friend once characterized as Jittery White Guy Music, which I adopted for this blog and my book (still available on Amazon, check it out!).

Rather than the gentler vibe of their next couple records, the Feelies' debut is pure bottled energy, guitarists Glenn Mercer and Bill Million bouncing off each other with staccato interplay, a fizzier take on Television's dual-guitar interplay. Original drummer Anton Fier gives the whole album an erratic, almost tribal percussive feel, playful and engaging. (Fier left the band after the album, later founding the revolving-door indie act Golden Palominos.)

Many of the songs highlight the band's trademark slow-builds, quiet guitar noodling that gradually builds into frenzied effervescence. Opener "The Boy With The Perpetual Nervousness" (and has there ever been a more band/album-defining song title than that?) and "Loveless Love" best exemplify this dynamic, the songs taking their own sweet time to take hold before blasting off; while the album-closing title track wedges the slow building instrumental exploration into its center. A few more fast-paced tunes reveal the band's roots as part of the New York punk scene, both "Fa Ce La" and their driving cover of the Beatles' "Everybody's Got Something To Hide" showcasing the band's rollicking live sound. Meanwhile, the mostly instrumental 3-chord "Raised Eyebrows" gives Fier a chance to go nuts with the unpredictable percussion before breaking look into joyful vocal glee.

Though still largely an album appreciated by those in the know, it's every bit as essential to the New York late 70s scene as the Talking Heads, Television, and Ramones.

Here are the original Feelies circa '79 with "Perpetual Nervousness":

Here's "Loveless Love" in 1990:Here are the reunited Feelies performing "Raised Eyebrows" and "Crazy Rhythms" a couple years back: