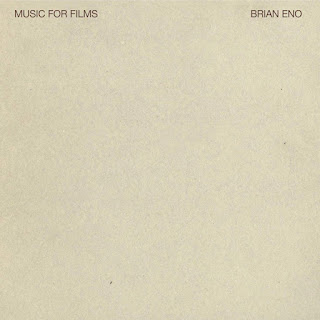 Having shared the U2/Eno imaginary soundtrack collaboration last week, I figured I'd head back to the original blueprint--one of the most-played records in my collection (owing in part to its being one of my go-to insomnia cures, but only in the best way).

By 1978, Eno had completed his run of brilliant and eclectic vocal records and moved into full-time instrumental ambient work, where he'd remain for the remainder of his career (with, sadly, only intermittent forays into vocal music). While Music From Airports from earlier that year comprised 4 lengthy suites of background music, Films was much more "song-oriented," as it were, with briefer snippets of ambient soundscapes. (As suggested by the title, the pieces were intended for use in films, and over the years a number of the songs, as well as tunes from a couple follow-up Music For Films collections, have appeared in various movies and tv shows.)

But unlike more generic ambient music, designed to fade into the background, many of these pieces are as memorable as his more traditional vocal songs from earlier that decade. Sure, there are wispy keyboards and electronics that waft out of the speakers, but also distinctive passages that, for all their minimalism, avoid becoming mere aural wallpaper. Indeed, while this and his masterpiece Another Green World are among the records I enlist when I'm plagued by chronic insomnia, both are interwoven with sounds and moods that resist simply lulling you to sleep (and a few I need to skip if I'm actually hoping to drift off). Here, it could be that creeping bassline in opener "Aragon" or the jarring guitar trills in "From The Same Hill" or the mystery-theater eerie synths in "Inland Sea" (to cherry-pick the opening triad)--tunes that are ultimately relaxing, helping distract me from the reality of still being awake.

Brief aside: Back in college, there was a period when my roommate and I regularly watched Miami Vice. The best episode ever, unlike the more typical fast-paced, flashy MTV-stylized episodes, was a haunting, striking hour of television in which Don Johnson went slowly crazy by trying to get into the head of a freaky home burglar. (And, yes, it was the same plot as Manhunter--the first Hannibal Lechter movie, which was made around the same time by Miami Vice creator Michael Mann.) And the episode (season 3's "Shadow in the Dark") opened with the burglar stalking a home backed by "Two Rapid Formations" from Music for Films. This had a huge impact on me, haunting me ever since, as I was listening to the record a lot back then, and hearing one of its pieces behind this scene was profoundly disturbing and thrilling. Here are a few seconds of that scene:

Anyway, if you need some stunning instrumental music, can't go wrong with this album.

...and an animated short for "Inland Sea":...and a clip for the propulsive, definitely less insomnia-friendly "M386":