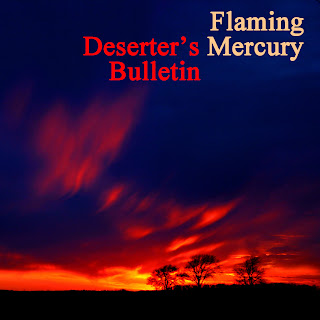 Of all the "imaginary" albums I've created, this is my new favorite. It's a merger of two of the greatest albums of the '90s (or ever, for that matter), both of which I've written about previously--Mercury Rev's Deserter's Songs and the Flaming Lips' Soft Bulletin. The records have long been linked for fans. They were recorded at the same time, in the same studio, by the same producer (Dave Fridmann), and Fridmann was porting studio tricks and sonic textures he was developing between the two bands. Of course, the bonds go deeper than that--Fridmann (who had been an original Mercury Rev member) had been producing both bands' work for some time, and Mercury Rev frontman Jonathan Donahue had spent a few years playing guitar for the Flaming Lips.

The albums share additional commonalities beyond the aesthetic overlap. Donahue and Lips frontman Wayne Coyne have a similar vocal sensibility, a Neil Young-ish warble; and both bands by this point had completely escaped their original roots as boisterous acid-drenched post-punk and adopted a sweeping sonic palette that embraced baroque pop and prog, lush washes of synths and strings and majestic chorales replacing the noisy electric guitars of the respective bands' prior records. Plus, Donahue and Coyne seemed to be in a similar mindset, a professional downswing that had to date largely evaded mainstream acceptance (though both records would change that), yet coming up with some of their most potent, epic lyrics to date. 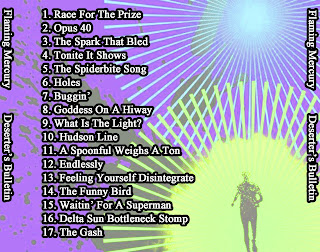 For the mix, I alternated between the two records, sequencing the tracks to be a sort of call-and-response between Coyne and Donahue; I eliminated a few tracks to make the theme work and keep it at a more manageable hour or so of music. I also edited down a few longer tracks and cross-faded the songs to create a unified Dark Side of the Moon-styled suite. Needless to say, it sounds outstanding.

As I assume anyone remotely interested in hearing this already owns both records, I'm sharing a download of my mix here (a zipped file of mp3s); the file will only be available for a limited time.

I've also recreated this as a Spotify playlist (though it loses some allure without the edits & cross-fades; note also that "Delta Sun Bottleneck Stomp" is one of those aggravating '90s album holdovers which has a "hidden track" pinned on at the end, which I can't edit out on Spotify, and it messes with the flow into the climactic track, "The Gash").