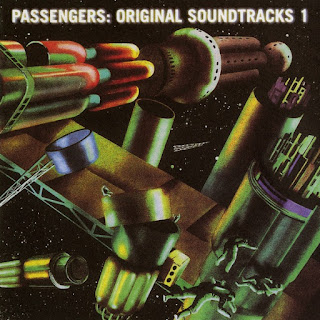 Though attributed solely to the fictitious band Passengers, 1995's Original Soundtracks 1 was a side project from U2 and Brian Eno, trying to break up the intensity of their mid-1990s recording sessions with some more laid back studio jams. Like Eno's own Music For Films, the album is comprised of atmospheric backing music for imaginary soundtracks (though a good chunk of Films ended up used in actual movies and tv shows). This one abets Eno's more ambient work with a fair amount of electronica burbling, and while it's similarly focused on instrumental backdrops, Bono lends some uncharacteristically understated vocals to about half the songs, hushed voices mixed in alongside the electronics.

It's hardly essential listening, but despite some critical slagging I find it a perfectly enjoyable collection of background music. And while it's best heard as a cohesive set of music, there are actually some decent stand-alone songs ("Miss Sarajevo," with its odd guest appearance of opera singer Luciano Pavarotti, is a pretty solid U2 track, albeit one that, as presumably intended, rarely grabs your attention). As a late night chill-out record or just something to have quietly wafting along as you work or read, it's worth a spin.