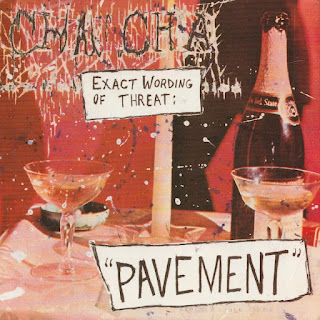 Yesterday, I got to chat about "Radio Free Europe" and how R.E.M. both changed my life and set the tone for my '80s listening habits. Pavement served as my '90s equivalent.

I've talked before about stumbling across Pavement back in '92 as the opening act at a Sonic Youth concert, then immediately running out to buy their recent debut Slanted And Enchanted. "Summer Babe" opened the record with a basic three-chord riff, blissfully distorted into the red, accented with the rambunctious fills of briefly-serving drummer Gary Young and the seemingly nonsensical yet captivating lyrics casually tossed off by a distinctively laid-back Stephen Malkmus. "Ice baby, I saw your girlfriend and she was eating her fingers like they're just another meal. But she waits there, in the levee wash, mixin' cocktails with a plastic tipped cigar."

It's not the band's best or most defining track. But, like "Radio Free" a decade earlier, it was the cathartic sound of a doorway being opened.

In a bit of fortuitous timing, I got to see Pavement just last week as part of their ongoing reunion tour. (I'd last seen them about 12 years ago, on their previous reunion tour.) They didn't play "Summer Babe"--it was apparently on the planned setlist but dropped for time--but I was pleased that my love of the band remained undiminished.

I didn't get my "Summer Babe" last week, but this one's from the same venue the prior night:
File Under: 1990s All My Favorite Songs Indie Rock Pavement