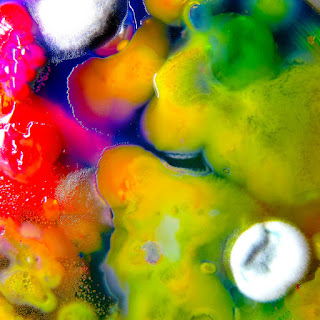 Almost exactly 30 years ago, my buddy Tom and I went to a Sonic Youth show at San Francisco's Warfield. A newish band I'd never heard before called Pavement opened, and changed my life forever, basically establishing the template for my musical life throughout the 90s and up through the present.

Last week Pavement paid it forward. I caught one of their reunion gigs at SF's Masonic (it was great, BTW), and really enjoyed the opening set from New York art-punk band Guerilla Toss. They're not an act that really fits in with most of my taste, much more experimental, with new wave synths and odd, math-rock time signatures. But they put on a hell of a live show, and I've been listening to their music ever since. (And, look, I'm not saying there weren't "enhancements" that made the performance particularly vivid.)

Their most recent album, from earlier this year, is probably their most electronic-oriented, with lots of retro keyboards and charismatic singer Cassie Karlson running her vocals through autotune, giving the album a playful, Disney Electrical Parade vibe. Their post-punk roots are still in the mix, a blend of the Slits and the B-52s and Devo, but infused with Animal Collective (and a touch of latter-day Flaming Lips). (And of course we should never underestimate the undeniable influence of that song from Revenge of the Nerds.)

Karlson conjures the occasional pop hook--opening numbers "Cannibal Capital" and the title track are pretty damn catchy behind the weirdness, as are slightly more restrained cuts like "Mermaid Airplane" and the psychedelic "Wild Fantasy." And album closer "Heathen In Me" is a surprisingly straight radio-ready pop tune, something I might expect to hear at the gym. But there's still plenty of left-field weirdness that might put off a lot of the Pavement-loving guitar-based indie rock crowd (of which I'm a part), but I find surprisingly engaging.

You can buy it at Bandcamp.