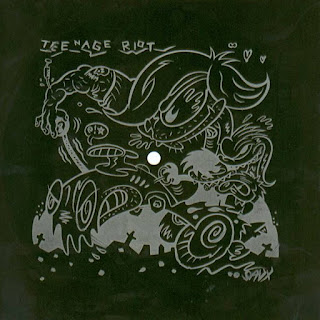 Sonic Youth's outstanding Sister LP from 1987--still my favorite--established that the band could write catchy, hook-based rock songs without surrendering the namesake noisy experimentation that made them unique. But on 1988's Daydream Nation, and "Teenage Riot" in particular, they proved that, with just a touch more polish, they could write a song that was downright radio-friendly.

"Riot" is still, of course, just a tad askew for the mainstream. There's that long, hushed intro, Kim Gordon whispering over a repeated, jangly guitar figure; and once the proper song kicks in at 1:20, there's still enough fizz to the oddly-tuned guitars to confirm this is Sonic Youth and not R.E.M. But oh, that riff! Coupled with one of Thurston Moore's most friendly vocal turns to date, the song is a veritable blueprint for the coming alt.rock era, post-punk energy tethered to anthemic rock that doesn't so much toss out the classic rock blueprint as brazenly push it forward. 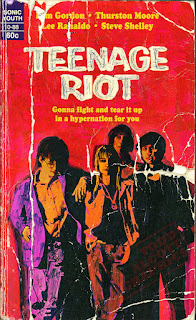 The lyrics are a little too cryptic and sprawling to lock in on a particular message, but for me, the song has always felt like the rightful heir to the Teenage Wasteland celebrated nearly two decades earlier in The Who's "Baba O'Riley." "Teenage riot in a public station, gonna fight and tear it up in a hyper nation for you!"