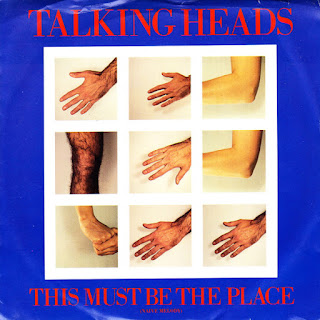 While I adored the Talking Heads' first four albums, 1983's Speaking In Tongues didn't quite click for me when it came out. Maybe it was the more dance-centric sound, which lost some of the artier, post-punk (and Eno-abetted) novelty of the earlier work. Or maybe it was just that it was kinda overplayed at the time, showing up at pretty much every high school and college party (especially when the Stop Making Sense movie and soundtrack made the band all the more omnipresent).

But the album did have that one nice little Easter Egg. Tucked on at the end, after some 40 minutes of funky, swampy beats, came the surprisingly delicate "This Must Be The Place." The complex polyrhythms of the album largely drop away, leaving a stripped-down insinuating groove, endlessly repetitive but not outstaying its welcome. At the forefront is David Byrne at his most earnest and whimsical, a throwback to the naivete of the debut album, though the Jonathan Richman-like wide-eyed exuberance was replaced by a gentler, more homespun joy.

The song didn't seem to get a ton of attention at the time; at those parties, the LP would generally come off the turntable after the more upbeat "Burning Down The House" and "Girlfriend Is Better," leaving that tender closing track for discovery on your own. But in the decades since, it's certainly found its way to a broader audience, covered by countless artists and showing up on tv shows and the like. And rightfully so, the Talking Heads at their most approachable and universal. "Home is where I wanna be. But I guess I'm already there."

Live Stop Making Sense version:Plenty of good covers abound, but I really like this one, from pastoral Americana/folk act Iron & Wine with singer Ben Bridwell (of Band of Horses):And for the jam band set, the String Cheese Incident have taken real ownership of the number:
File Under: 1980s All My Favorite Songs Classic Rock College Radio New Wave Talking Heads