All My Favorite Songs #36: After The Gold Rush 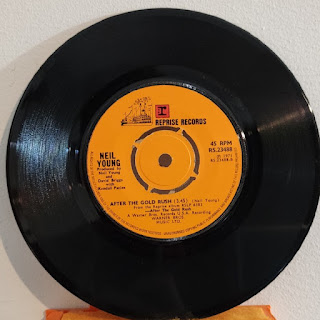 Neil Young's 1970 masterpiece After The Gold Rush is a work of majestic beauty, full of sweet, heartfelt tracks (broken up only by Crazy Horse's boisterous "Southern Man"). Yet even on such a thoroughly embracing album, the title track manages to stand out. It's just Neil at his piano, his voice at its most plaintive, the lyrics unforgettable--poetic and evocative, Neil journaling his post-apocalyptic dreams, yet still setting the scene of a discrete time and place. "I was lying in a burned-out basement, with a full moon in my eyes. I was hoping for replacement, when the sun burst through the sky. There was a band playing in my head, and I felt like getting high. I was thinking about what a friend had said, I was hoping it was a lie."

Sadly, the environmental theme of mother nature on the run in the 1970s sounds all the more haunting and desperate today.

Plenty of covers out there, but Neil collaborators Linda Ronstadt & Emmylou Harris do a particularly striking version: ...while the Flaming Lips add a bit of chaos yet remain suitably reverential:
File Under: 1970s All My Favorite Songs Classic Rock Folk Neil Young