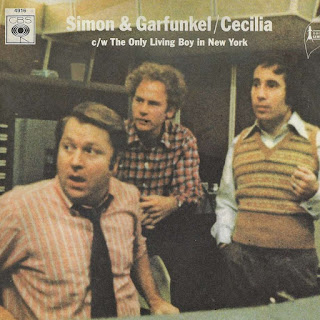 Simon & Garfunkel were one of those acts I spent much of my life disdaining (or at least ignoring). My parents had Bridge Over Troubled Water on 8-track tape when I was a kid; we had to learn "El Condor Pasa" on recorder back around 4th grade, when we all had to play those stupid plastic recorders; we'd sing songs like "The 59th Street Bridge Song" and "Homeward Bound" at summer camp. So I built up this association of Simon & Garfunkel with music for children and old people, and as I got into rock (and punk, and indie) in my pre-teen and teen years, they were relegated to the Do Not Play bin.

But in adulthood, as I gradually explored the music I'd sworn off in my youth, I rediscovered them and found much to love. And "The Only Living Boy In New York," from that 1970 Bridge 8-track my parents had, really leapt out as one of those how did I miss this? moments. It had historically seemed overshadowed by the title track, and "The Boxer," and the silly, rollicking "Cecilia" (the single of which it was incongruously relegated to b-side status). But "Only Living Boy" transcends all of those.

It's largely the poignant lyrics, Simon's forlorn goodbye to his longtime musical partner as Garfunkel makes his way to Hollywood, delivered with a peak Simon vocal performance; and of course the stunning harmonies, the duo apparently sent off to a local church to record layer upon layer of backing vocals to create the sound of a massive, heavenly choir. No less impressive is the restrained percussion (from legendary studio drummer Hal Blaine), barely present, just a waft of tom & bass drum between verses yet something that always grabs my attention.

The song got a sort of second life when it showed up on the quirky soundtrack of Zach Braff's 2004 film Garden State, giving it some hipster cred nestled among the Shins tracks.

And, hey, how about that sleeve up there from the "Cecilia" single? Nothing like a photo of burly producer Roy Halee, with his striped dress shirt and loosened tie, to make any real rock & roller want to run out and buy the record! But kudos to the boys for acknowledging Halee's work, as the sterling production of the song is a huge factor in its breathtaking beauty.

And live...
File Under: 1970s All My Favorite Songs Classic Rock Simon & Garfunkel