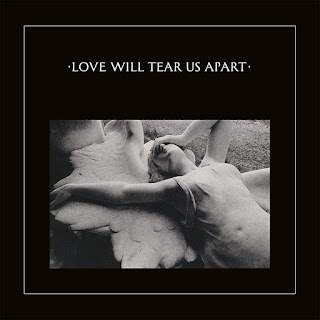 Showing up here just a couple days after New Order's "Temptation," the two songs give an indication of where Joy Division might have gone had singer Ian Curtis survived.

This 1980 single is probably the easiest entry point for the not-exactly-user-friendly Joy Division, a synth-driven pop single that's as lyrically dark as most of their work yet softened by the hum-along hook and the uncharacteristically gentle guitar strums and Curtis' adoption of a slightly more Sinatra-esque croon to take the edge off his pained, spooky baritone. Oddly, I don't think I heard this until after I had gotten into the band's two proper albums; at the time I discovered the band, it existed solely as a pricey single and had yet to be collected on any compilations. So after the far more harrowing sounds of Unknown Pleasures and Closer, "Love" almost felt like a relief, a light, radio-ready tune that went down easy.

At least until you drilled in on the lyrics, Curtis essentially setting the break up of his marriage to music. "When routine bites hard, and ambitions are low. And resentment rides high but emotions won't grow. And we're changing our ways, taking different roads. Then love will tear us (it?) apart again." Dark stuff, but once it's tethered to that infectious melody it's almost a feel-good feel-bad song.

And given a shinier pop gloss by a live New Order:
File Under: 1980s All My Favorite Songs Joy Division New Order New Wave