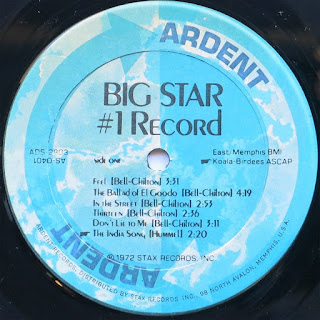 Alex Chilton was no one's idea of a sentimentalist, any more than, say, Lou Reed. But just as Reed's unusually poignant "Pale Blue Eyes" was way up on my list, Chilton's ode to (very) young love off the astounding Big Star debut is irresistible in its earnest charms. Tucked in amongst the album's rockers on side one, "Thirteen" stands out, a simple, finger-picked acoustic guitar riff and a gentle croon extolling the virtues of meeting at the pool, going to the school dance, and pissing off dad by spinning the Stones.

Like all of Big Star's relatively small yet perfect body of work, the song was an obscure pleasure for music nerds for the longest time, but once it was discovered in the 80s it blew up, covered by seemingly everyone (much like Chilton's other quiet stand-out from the record, "The Ballad of El Goodo"). It showed up in various movies and tv shows. I remember my daughter, barely a teen, recognizing it when I played it in the car--she didn't know Big Star from Bieber, but she knew the song from an episode of Gilmour Girls.

And as much as I enjoyed this being one of those well-kept secrets, it feels great to see the song getting the wider audience it deserves.

Just one of countless tributes...R.E.M.'s Mike Mills with Big Star drummer Jody Stephens and Luther Russell:Oh, what the hell, how about a whole playlist? "Thirteen" by 13!