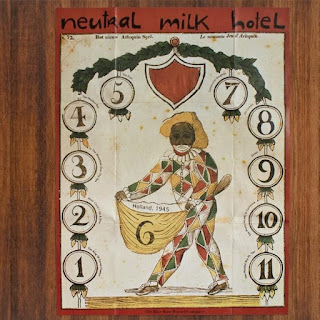 Back-to-back tracks from the late '90s, but this isn't one I recommend lightly. It's not an easy song--Neutral Milk Hotel's Jeff Mangum sings it in a cathartic wail that's part Neil Young, part Ozzy Osbourne; distorted guitars over-saturate the speakers, recording levels well into the red; a cacophony of frenetic drums and trumpets pervade the lo-fi production (from Apples in Stereo's Robert Schneider); and of course those lyrics.

Mangum was apparently reading about Anne Frank and the Holocaust when he recorded 1998's legendary In The Aeroplane Over The Sea, and the subject matter is at the forefront of "Holland 1945." The song opens with the chilling, "The only girl I've ever loved, was born with roses in her eyes. But then they buried her alive, one evening 1945, with just her sister at her side. And only weeks before the guns all came and rained on everyone." From there, it juxtaposes vivid dream-like imagery (pianos filled with flames, children riding comets) with harsh wartime reality ("Now we must pack up every piece of the life we used to love, just to keep ourselves at least enough to carry on"). And that closing line: "It's so sad to see the world agree that they'd rather see their faces fill with flies. All when I'd want to keep white roses in their eyes."

The song manages to be both shocking and beautiful. Like the album itself, it's something I only pull out once or twice a year. It's too emotionally charged, and I never want it to be just another song in my collection, but rather a bracing, new discovery on every listen.

Or a version with some homemade 3D animation:Mangum dissolved the band after Aeroplane, essentially disappearing while the album's cult-like devotion grew; but here's a live version from a brief 2014 reunion tour:
File Under: 1990s All My Favorite Songs Elephant 6 Indie Rock Neutral Milk Hotel