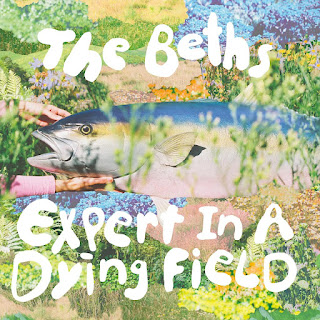 I'm emerging from Thanksgiving weekend, when all of America sits down and starts working on their annual year-in-music mixtape. (No? Just me?) Plenty of great stuff. And as has been the case frequently in recent years, women-fronted groups tend to dominate my year-end playlists. Here's an initial stab at 10... no, let's make it 11... 11 songs I really loved this year.

In contrast to the jangly indie pop and fizzy noise pop that's most prevalent below, Guerilla Toss lean to the experimental side, their blend of math-rock rhythms, new wave keyboards, and Kassie Carlson's buoyant, auto-tune-boosted vocals infuse quirky post-punk indie rock with retro B-52s and Devo vibes. This year's Famously Alive is a terrific record, innovative yet catchy as hell; but my favorite song of theirs, and of the year period, showed up on a box set retrospective of Krautrock pioneers Neu! It's an original, not a cover, offered as their personal tribute to the band's influence; me, I'm not a big Neu! fan, but I love this to death. For me, it was 2022's "Chaise Longue," a song sounding nothing like anything else I was listening to but which I eventually had to ration so I wouldn't play it to the exclusion of all else.

DC-based Dot Dash conjured yet another album chock full of ever-so-slightly-edgy post-punk power pop; the lead off track from Madman In The Rain is a honey-drenched earworm.

The Beths, "Expert In A Dying Field"

Expert In A Dying Field, the third LP from New Zealand's Beths, loses no steam from the first two, another fistful of guitar-driven noise pop, elevated by Elizabeth Stokes' octave-hopping charm. The title track is yet another example of wickedly clever lyrics paired with a winning hook.

A highlight off an album full of highlights, Momma delivered a third LP of unabashed retro 90s alt.rock, polished and repurposed for the 2020s. The sound of a couple young women whose parents presumably raised them on a steady diet of Pavement and the Breeders and Smashing Pumpkins and who decided, yeah, we can do that...

2nd Grade's second LP again runs jangly power pop through a Guided By Voices-styled rapid-fire lay-down-the-hook-and-move-along approach. Whimsical, humorous, and endlessly catchy, most notably on this atypically lengthy 3-minute-plus slice of old-man-shakes-his-fist-at-those-damn-kids number, with lines like "Too many people living in war zones of typical teenage hormones; we never should've given smartphones to the generation of teenage overpopulation."

2017's excellent Antisocialites was a tough act to follow--one of my most-played records of the past decade--but Blue Rev comes pretty close, another batch of sugary indie pop run through the Jesus & Mary Chain wall of sound. Plenty of catchy tunes, but this one caught my attention early on.

The Hanging Stars, "I Don't Want To Feel So Bad Anymore"

The latest slab of cosmic Americana crossed with Paisley Underground-styled jangly psychedelia from London's Hanging Stars. Mostly blissed-out beach music from the Beachwood Sparks school of gentle twang and harmonies, though this one is unusually upbeat, a heady, amped-up Byrds revival as performed by the Rain Parade or the Things.

For Executive Meeting, the latest from singer/songwriter/music critic/journalist/Jill-of-all-Trades Elizabeth Nelson and her crew, once again offers a potpourri of music-based education, impeccably detailed history lessons demanding a lyric sheet & Wikipedia. The reliably tight and respectably versatile band provide a broad musical palette, from post-punk to Americana to baroque pop, as Nelson holds court on everything from obscure record cover artists to celebrated writers to the Velvet Underground. This track may be its most straight-forward rocker, digging into the halls of bureaucracy (the song title presumably drawn from a less than charitable nickname for a bland federal building in DC, where Nelson has done her time as a government employee). "Commemorative plates are prominently displayed, and they do impress the neighbors, who are really taken with the Bob Newhart set and Baskin-Robbins 31 flavors."

Aussie band conjures the glory days of the 80s/90s New Zealand underground, when bands like the Clean and the Bats ruled the universe (or the imaginary universe where I live). This tune in particular nails that shambling, slack guitar style, highlighted by intertwined male & female vox and a woozy bassline.

The Boys With The Perpetual Nervousness, "As The Day Begins"

Pop-punk act Ex-Vöid revive 90s pop-punk, populated by sweetly enticing male/female vox, somewhere along the lines of Blake Babies and the Lemonheads. A few tracks lean towards the surprisingly melodic, like this jangly little ditty.