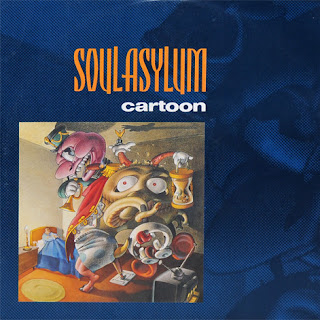 Kind of an odd entry on the Top 1000: a song by the non-primary singer/songwriter of a band I probably don't spend enough time with. Indeed, I rarely listen to Soul Asylum's Hang Time, the 1988 album where this song originated (though I still have some sentimental feelings for 1992's Grave Dancer's Union and some later work). Guitarist Dan Murphy takes the mic from frontman Dave Pirner, minting a whiz-bang indie pop-rock anthem--a buzzy and instantly familiar drop-dead-perfect guitar hook with winning couplet after winning couplet. "Maybe I'm chasing shadows on your wall. They loom so large but make me feel so small, so hard, when you're chasing your own tail, spinning your own wheels." "Did it almost make you fell like something's gotta happen soon? You're in the movies now, and I'm in your cartoon."

Murphy rarely got the spotlight in Soul Asylum (from which he recently retired), though he had plenty of star turns with the Golden Smog supergroup, holding his own with Jeff Tweedy and various Jayhawks, among others; "Cartoon" is the sort of track that makes you wonder how that could be, one that demands high volume and repeat plays.