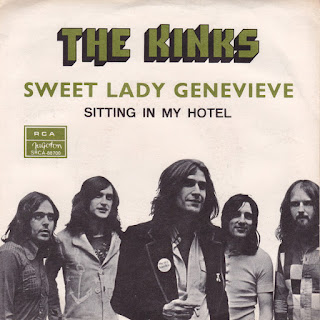 A bright spot in the catalog of sometimes-iffy mid-70s Kinks albums. While Ray Davies was more focused on narrative theatrical productions during that Kinks era, he could still write an amazing stand-alone track when he got right down to it. "Sweet Lady Genevieve" appeared on 1973's Preservation Act 1, an underrated record with a handful of pretty decent songs, albeit wedged in among some concept-album set pieces that don't work so well as individual tracks. (Not to be confused with the following year's Act 2, a double album that had dismayingly few stand-out tunes.) While ostensibly a character study of the town drunk, lamenting the woman he wronged, it works just fine freed of the record's murky context--it's got a wonderful hook, chunky acoustic guitar and harmonica, and some lyrical whimsy delivered by an enthusiastic Davies, making (yet another) strong case that Davies was one of rock's greatest lyricists. "Once, under a scarlet sky, I told you never-ending lies. But they were the words of a drunken vagabond, who knew very well he would break your heart before long. Oh, forgive me, Genevieve."
Seriously, how many other songwriters could put that together? The song was released as a single in parts of the world, but didn't go anywhere. (The B-side, "Sitting In My Hotel," off the previous LP Everybody's In Showbiz, is another 70s highlight, one of Davies' most beautiful songs, making this one of the most killer singles around; what's wrong with people???) The song didn't make it into the repertoire when the Kinks returned to arena rock in the late 70s, and never seemed to make the shortlist of Kinks tracks in classic rock radio rotation, meaning a lot of Kinks fans missed out on an obscure but wonderful tune.
File Under: 1970s All My Favorite Songs Classic Rock Kinks