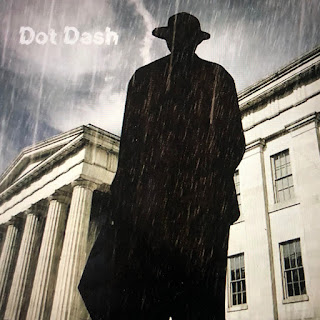 The latest from DC-based indie-pop act Dot Dash is one of those records that wins me over on first listen, quickly sprinting into place as one of my favorite new records of the year. The band retains some of that arty pop-punk suggested by their name (presumably a nod to the Wire track), as found on their earlier releases; but for the most part this is sprightly pop music with the skewed Wire edge merely hinted at. Like a few of my other faves this year, Dot Dash offer a rapid-fire blast of pithy, punchy pop, combining the GbV-like barrage of hooks found on 2nd Grade's Easy Listening with the jangly, Teenage Fanclub-ish charm of the Boys With The Perpetual Nervousness.

Opening track "Forever Far Out" is an immediate attention-grabber, a ridiculous earworm nugget. On first spin, it took me back to New Zealand Kiwi-rockers The Verlaines (a rollicking opening salvo that reminds me of that band's "Lying In State"). "Airwaves" is another almost ridiculously catchy track, again giving their jangly power pop a touch of that New Zealand vibe. And while the upbeat tunes stand out, the mid-tempo tunes break things up nicely; the title track in particular carries remarkable charm, frontman Terry Banks showing some endearing vocal chops.

Buy it on Bandcamp. And while you're there, treat yourself to the last one as well, 2018's fantastic Proto Retro, a slightly more rocking record riddled with noise pop joy.