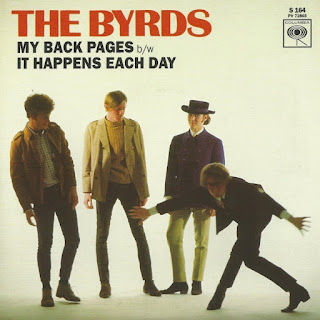 Another one off that Byrds' Greatest Hits cassette I picked up at the mall when I was 12 or 13. And it probably had a lot to do with triggering my life-long love of jangly guitars and honey-drenched harmonies.

The lyrics were pretty eye-opening for a kid just moving beyond the silly pop songs on the AM dial. It was one of the earliest times I recall rewinding the tape over and over to try to figure out the words (maybe a year or so before I started spending hours in my room reading along with the lyrics on Pink Floyd gatefold record jackets). "Existence fled by confusion boats, mutiny from stern to bow." No clue what that meant (or if those are even the actual lyrics; there are a million variations), but those were some good words. 40+ years later, I still look out on the water and wonder, Are those confusion boats?

Of course, the cryptic verses were just teasers for that chorus, the soaring harmonies repeating the amazing refrain, "Ah, but I was so much older then, I'm younger than that now." One of the 2 or 3 greatest lyrical twists ever, right?

Of course, I was just a pre-teen with a cut-out cassette from the nearby Musicland, which probably didn't even have any credits in the j-card; at some point I figured out the song was written by some Dylan guy. Somebody should check that guy out; he's got some really good words.

One of my favorite live clips ever (Dylan 30th anniversary celebration, with Bob joined by Roger McGuinn, Neil Young, Tom Petty, George Harrison, and that anti-vax guy):And always loved the version on the Ramones' album of cover songs (a fun turn with CJ on vox rather than Joey):
File Under: 1960s All My Favorite Songs Bob Dylan Byrds Ramones