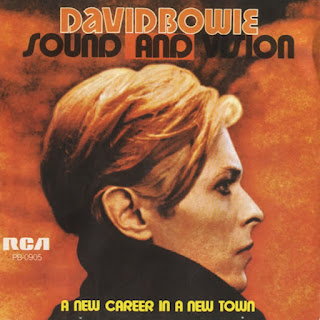 I first got into Bowie when I bought the ChangesOneBowie compilation cassette as a kid. As noted previously, it totally captivated me; so many fantastic songs, in so many different styles. But in those pre-internet days, I didn't know much about him, and figured that was the capstone of his musical career. So it was pretty crazy when I went to the library and discovered he was still making great music, and that some songs were even better than the ones on that tape.

"Heroes," of course, got my attention right away. But "Sound and Vision," when I stumbled across it a bit later, was no less astounding. "Heroes" had the emotional tug, but "Sound" had that unbelievably infectious hook, the blend of weird synths and odd percussion (what the hell is that strange electric-fizz cymbal sound in my right speaker?), and that instantly familiar jangly guitar hook carried along by a wicked bass groove. The lyrics are almost an afterthought, seemingly just getting started when the song fades out, Bowie pulling out that baritone croon (dueting with himself) with the female woooh-oohs calling to mind Lou Reed's "Walk On The Wild Side." It's the perfect pop song, unforgettably catchy and way too brief, leaving me wishing it would go on for a few more minutes.

Live in 2002:Very cool electronica update from The Sea And Cake:
File Under: 1970s All My Favorite Songs Classic Rock David Bowie Sea And Cake