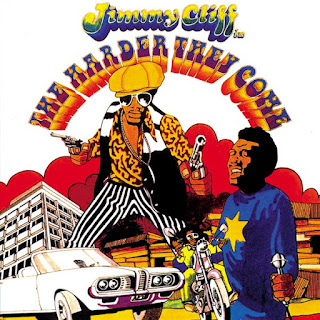 This wonderful tune from reggae legend Jimmy Cliff first appeared on a 1971 album, but I'm assuming most people, like me, discovered it through its inclusion on the essential soundtrack for the following year's The Harder They Come, a gritty film about a budding reggae singer (played by Cliff) trying to break out of Jamaica's mean streets. Unlike the reggae tracks that populated much of the soundtrack, or Cliff's gorgeous "Many Rivers To Cross" (more of a gospel tune), "Limbo" feels like straight R&B-tinged pop.

Like Big Star's "Ballad of El Goodo," it's a spiritual for those of us who would never otherwise listen to "spiritual" music. "Well, they're putting up resistance, but I know my faith will lead me on." It warmly embraces your soul, abetted by Cliff's gentle vocals, light acoustic guitar jangle, and tasteful percussion (with that little bell!). Turning again to a passage in my book (sorry to drop that on you two days in a row), here's something I've previously shared: 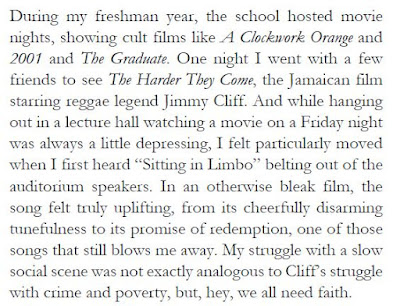