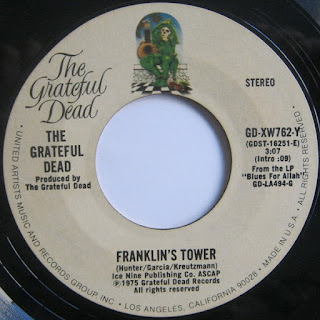 Wow, made it to 100. Only 900 more to go! (Ok, not sure I'm gonna be able to stick it out that long... especially once Musk drives Twitter into the ground and I don't have a place to share these posts. Maybe I'll find a new social media platform? Or just enjoy one less distraction in my day? Time will tell!

Anyway, "Franklin's Tower." Ok, perhaps not the most impressive example of the Dead's music--it's a basic three-chord riff played endlessly throughout the song--the verses, the choruses, the jams; not so much as a bridge to shake things up. But that also makes it an ideal showcase for some of Jerry's most hypnotic noodling, not to mention some terrifically strange Robert Hunter lyrics ("If you plant ice, you're gonna harvest wind"? Sure, I suppose...)

The original studio version on 1975's Blues for Allah is a concise little pop song propelled by a gentle reggae groove and burbling keyboard fills. But of course on stage they stretch out a bit, the sort of thing than can go on for quite a while without wearing out its welcome. Indeed, it was hearing an early live performance--from a 1975 San Francisco show when, after a year or so sabbatical, the Dead emerged from their caves and previewed the Allah LP--that played a large role in converting me from a Never-Deader to a life-long Dead fanatic. (That show, which I heard on a hissy cassette shared by a friend in the college dorm, later became the Dead's first archival release, One From The Vault.) So, yeah, a lot of my love for this number is deeply personal, each repeated "Roll away the dew" taking me back to those early, wide-eyed (ok, maybe a little red-eyed) days of diving down the Grateful Dead rabbit-hole--something I wrote about in my book and shared here previously.