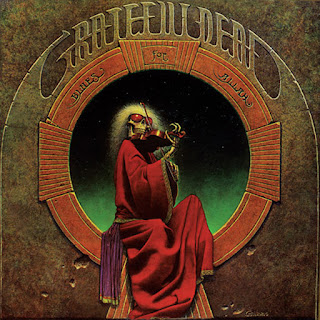 It was June 1988. I'd just graduated college, and my girlfriend & I were spending a couple days in New York before heading out for a low-budget post-graduation vacation together in Spain. As was my custom back then, no visit to New York would be complete without a day spent trawling the city's used record stores, hitting the myriad shops in the West Village before crossing town and scouring the stores lining St. Mark's Place. I was excited to find two Dead CDs I'd been looking for, used and at a decent price--both 1975's Blues for Allah and 1973's Wake of the Flood.

As described multiple times here (and in my book), I'd overcome my disdain for the Dead in the middle of my college years, turned on to them after hearing just the right live recording in just the right state of mind. Like a lot of fans, I'd begun my journey with some select live tapes, duped from school friends' shoebox collections, before exploring their studio albums (beyond the basic "hits" I was familiar with from the radio). I'd started with their 1970 Americana twin classics Workingman's Dead and American Beauty, and then moved backwards to their psychedelic heyday of Anthem of the Sun and Aoxomoxoa. But I hadn't yet dug into their mid-70s work, and was psyched to snag this pair.

I had to wait until after my vacation to dig into my purchases--I don't think I'd bought my first Sony Discman yet, so I was limited to my old Walkman and a fistful of cassettes on the trip. But they made for a pleasant treat on my return, both exceeding my expectations. Wake was great--I've talked about it before--but Allah made a particular impact at the time. The opening suite of "Help On The Way/Slipknot!/Franklin's Tower" was what first won me over to the band, hearing it on a hissy tape of a 1975 performance (later officially released as One From The Vault); the studio version was slower, but had a really nice jazzy feel to it. "Franklin" in particular had this hypnotic, percolating groove, different from the more straightforward riff-rocking of live performances, and the recording actually does a nice job of capturing the artfulness of Jerry's leads, more so than much of their studio catalog.

I was familiar with most of the album from that '75 show, where they had first shared it with the public, but despite the constant slag on the Dead as "not a studio band," I really liked these versions. "Crazy Fingers" was one of Garcia's prettiest, most tuneful ballads, a complex composition that slipping gently from reggae to hushed lullaby, and its complexity didn't always translate well to the stage; it's one of the handful of Dead tunes I prefer on record (which isn't to say they don't sometimes nail it live). Weir's more upbeat "The Music Never Stopped," in contrast, was probably better served as a frenzied live set-piece than in its more restrained studio version, but it was still great, one of my favorite Weir originals with some nice vocals by Donna Godchaux and a bit of sax.

Alas, I couldn't abide by the title suite, a lengthy dirge that, despite some tripped-out guitar noodling and a soulful hook in the middle, struck me as rather silly, kinda like the spoken-word interlude from Spinal Tap's "Stonehenge" blended with Spinal Tap's Puppet-Show opening "Jazz Odyssey." It's never really grown on me. So between that, and a pair of fine but inessential instrumentals, it ends up being a rather slight album, maybe best heard as a 30-minute EP. But to my ears it sounds great and remains a personal favorite nonetheless.

Here's an audio rip of the record's version of "Franklin's Tower":