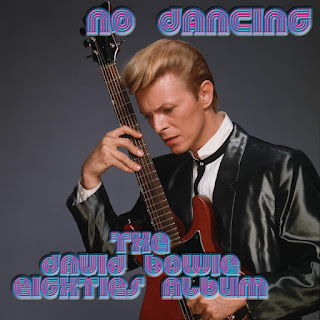 I've been spending (wasting?) a good amount of time lately making myself "imaginary albums," either rebuilding old favorites by swapping some b-sides/outtakes in for weaker tracks, or building new albums from scratch. And for some time, I've been wondering if I could make myself a halfway-decent Bowie album from his abysmal 80s era, something I'd actually listen to. Not sure I pulled it off, but here's what I came up with.

In some ways, Bowie's career tracked Neil Young's--both were among the top solo artists of the 70s (arguably the top two), with a string of albums which varied stylistically (ok, Bowie's variations were more dramatic, but Neil moved around a bit as well). Both then struggled creatively in the 80s before making artistic comebacks in the 90s.

Those 80s struggles were quite different, however. Neil became increasingly experimental and un-commercial, trying out various styles that often befuddled fans and critics (and got him sued by his label for making Neil Young records that didn't sound like Neil Young records). In contrast, Bowie made a deliberate move to become more commercial, trading artistic integrity for glossy pop (which worked, netting him some of his best-selling records to date). For all of Neil's foibles, I actually like some (not all) of his 80s work; whereas I am no fan of Bowie's albums from the era.

To me, Bowie's trio of mid-80s releases suffer from both weak songs and, more damningly, horrific 80s production, gated drums and cloying synths which sucked the life out of even the more salvageable material. I liked a few singles and deep tracks, but even those could be a slog due to their sonic dreck (not aided by radio overplay). 1983's Let's Dance included "Modern Love," an actually pretty great pop song, but I've never liked the title track (which gives this mix its name). The other standouts were ringers--"China Girl" was a remake of a song he'd given to Iggy Pop, and "Cat People" had been recorded earlier for the film of the same name (and, personally, I prefer the slower, less bombastic original, which I used on this mix). The balance is blecch.

1984's Tonight was even worse--yes, "Blue Jean," like "Modern Love," was another unimpeachable pop single, but aside from the entrancing "Loving The Alien," the rest is pretty horrifying, arguably the worst record in Bowie's half-century career. The final record of the trilogy, 1987's Never Let Me Down, is a mixed bag--less actually terrible than its reputation, with a few fine (if underwhelming) songs, though again the production is painful. 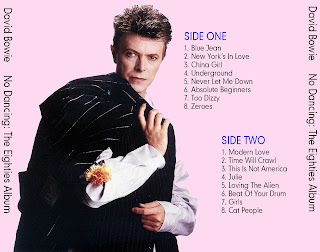 The recent box set compiling these records, Loving The Alien, helpfully included a couple discs of extras that were preferable to the proper albums--some single/alternate versions that were a little better (or at least shorter) than the LP versions, as well as some decent outtakes and soundtrack cuts. This mix draws primarily from the box (with the exception of the afore-referenced earlier version of "Cat People" and a few alternate versions I found elsewhere). I also included "Too Dizzy," a deep cut from the UK-only version of Never Let Me Down which Bowie hated so much he omitted it from all later reissues; it's not a great song, but I kinda like it (but, alas, its deletion from the catalog means it doesn't stream).

Anyway, check it out. Maybe it's sorta ok?