Pete Townshend: A Rough Draft History Of The Who 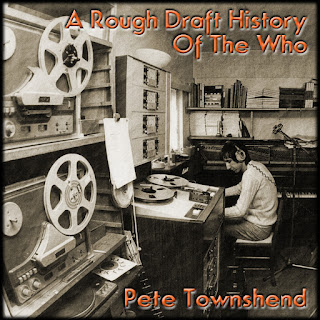 Another mixtape project, this is something I threw together for myself this weekend--a collection of Pete Townshend's Who demos from across the ages.

Townshend has long been one of the artists most willing to share his creative process with fans. Indeed, I think he was one of the first rock artists to introduce the concept of the "demo tape" to the masses, playing some of his early tapes at a rare early 70s solo concert (later captured on a bootleg LP). Though originally slipping out primarily on bootlegs, his massive vaults of demos have gradually become officially available -- both on a series of solo collections (under the Scooped moniker) which compiled both Who demos and other solo recordings, in somewhat haphazard fashion; and, later, as bonus tracks on deluxe editions of various Who albums. 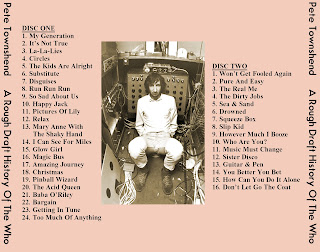 This is my attempt at rearranging some of the best demos in chronological order. I made myself a 2-CD collection, and recreated it below as a Spotify playlist. Alas, some of the most essential demo reissues don't stream--most notably the long out-of-print Lifehouse Chronicles, which collected a couple dozen demos of tracks for the abandoned Lifehouse concept album (later condensed into Who's Next) as well as songs that later showed up on Who By Numbers and Who Are You; and the deluxe version of Tommy, which includes a demo version of the entire album. So there are some big gaps on the playlist. On the plus side, the deluxe version of Quadrophenia which includes a massive stash of demos does stream. (If there's any interest, I could share a download of my CD mix.)