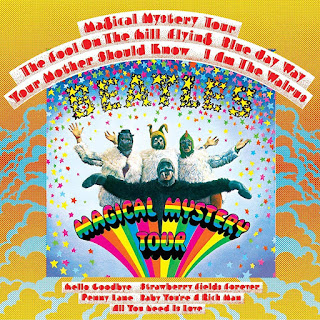 Magical Mystery Tour never seems to get the same love as other Beatles albums. There's probably (or should be) broad consensus that 1966-1969 quartet Revolver/Sgt. Pepper/White Album/Abbey Road is the greatest run of records ever produced (yes, I realize Let It Be was recorded before Abbey Road, but it came out later, so let's not go there). Yet you don't usually see Magical, which came out smack-dab in the middle, on that list.

Some of the bias stems for the hodge-podge nature of the collection. It was released in the UK as a 6-song EP, the soundtrack from the ill-conceived Beatles tv special of the same name; while the US version brought it to full-length with the addition of 5 singles (side 2 of the LP). So maybe it's better viewed alongside the Yellow Submarine soundtrack (which, comparably, pooled a handful of great originals/outtakes with the incidental orchestral music from the animated film).

But for me, it's still a great album, one of the band's best, and worthy of inclusion in that amazing mid/late-60s run. It was probably the first full-length record of theirs I heard as a kid (after the "Blue Album" singles collection), and was perhaps the first indication that I needed to get beyond the obvious radio hits to really appreciate the unique wonder of the Beatles (though it was hearing the White Album that really solidified this for me).

From the movie half, "I Am The Walrus" is arguably the band's psychedelic peak, weird and wonderful and still mind-blowing after all these years; the title track is silly and slight but no less compelling for it--it just sounds great, showcasing the importance of the production in giving even lesser songs real immortality. The balance is, ok, maybe not at the same level--"The Fool On The Hill" is undeniably great but not something that holds up as well for me, and George's "Blue Jay Way" is another example of his experimental side but a bit grating; while the "When I'm 64" sequel "Your Mother Should Know" and mostly instrumental "Flying" are fine but on the more inessential side.

But then you've got the singles on side 2, right? "Strawberry Fields Forever" and "Penny Lane" are, of course, the flip-sides of probably one of the greatest 7"-ers of all time, even if they more rightfully belong on Sgt. Pepper (where I have placed them for purposes of my personal re-working of that record). And I'll never understand why "Hello Goodbye" gets slagged by so many fans--yeah, fine, lyrically it's lightweight Paul, but I think it's simply one of the greatest pure pop songs in history; I'll defend its greatness to the death. "Baby You're A Rich Man," well, I dunno--another psych tune that grates a bit, but I've always loved it, and "All You Need Is Love" is... hey, it's "All You Need Is Love."

So pound for pound, a truly stunning album, even if perhaps less organic than the ones that preceded and followed it.