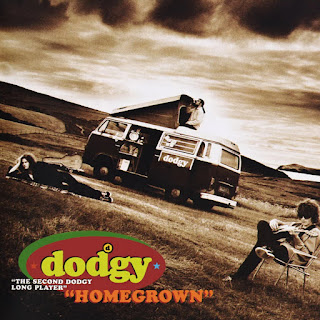 When I sat down a few months back to make myself a '90s Britpop mix (you can check it out here), it was a way for me to explore a genre I'd largely ignored at the time. I figured I'd get some of the bands I generally knew together in the same place, maybe find a few ace singles I enjoyed. But it's been the gift that keeps on giving, as I've discovered a lot of really great bands who never made much of a splash in the States (or at least didn't penetrate the American indie bubble I was in through most of the decade).

Dodgy are one of my favorite new discoveries. Sure, they've got a few top notch singles, but their albums are loaded with terrific deep cuts as well. Their original 3-LP run from '93-'96 is particularly solid (though I enjoy the post-reunion records they've released in the past decade as well). Yeah, to my untrained ears, it's hard not to come away with the impression that they sound a lot like Oasis--only, frankly, much less bombastic and more melodic. Plus shades of the Stone Roses, of course, as they bounce between straight, catchy guitar pop and some more '60s-inspired light psychedelia.

I particularly like their second album, 1994's Homegrown, which has a high ratio of tracks which have me running for the re-play button. Lead-off track "Staying Out For The Summer" is wonderfully catchy pop, as is the perky "Making The Most Of...," both of which seemed prime for massive radio airplay. But you've also got some jangly ballads like "Melodies Haunt You" and "So Let Me Go Far" that really insinuate themselves into your head.

Anyway, if like me you passed these guys by back in the day, check 'em out. (And if you really like them, they just put out a nifty 8-CD box set containing their first 3 LPs plus a few discs of b-sides and live tracks.)

Here's the "Staying Our For The Summer" video: