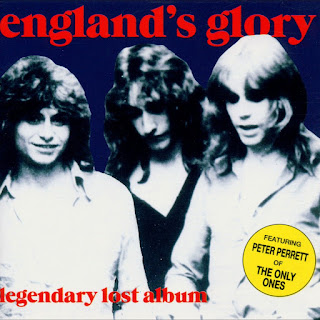 Going with a pretty obscure one today, folks. I've previously posted on The Only Ones, a mostly-overlooked late 70s UK band that crossed power pop, new wave, punk, and glam (and netted one killer single in "Another Girl, Another Planet"). England's Glory were an earlier band featuring Only Ones frontman Peter Perrett; I don't think they released anything during their actual existence, but following the Only Ones' rise, a few collections of unreleased studio recordings and demos made their way into circulation. Legendary Lost Album collects 10 songs recorded by the band in 1973 (and the CD adds a few more from later sessions).

Perrett's work with the Only Ones gets tagged with the obvious comparisons to Lou Reed (and Television's Tom Verlaine), but the Reed comparison is even more apt for his England's Glory recordings. Indeed, this record could be mistaken for a long lost Lou Reed solo album, sounding pretty much exactly like his work from the debut through Berlin. Whether it's homage or imitation, who knows, but if you like early Lou, you'll likely enjoy this, regardless of whether you're familiar with the Only Ones.

It's mostly pretty stripped down, a varied assortment of mid-tempo ballads with laid back guitar and piano. The mood can be a bit dark and proto-glam/goth, as per Berlin, but there's also a sweetness to the songs, while Perrett's obvious reverence for both Reed & Dylan gives the songs the feel of character-study vignettes. It occasionally rocks out a little ("City of  Fun" stands out as an almost pop-friendly track, and it was later re-recorded as an amped-up rocker by the Only Ones); and some of the melodies are quite pretty ("First Time I Saw You" is a haunting number, shades of the mellow side of the Velvets or Stones).

Audio rip of "City of Fun":