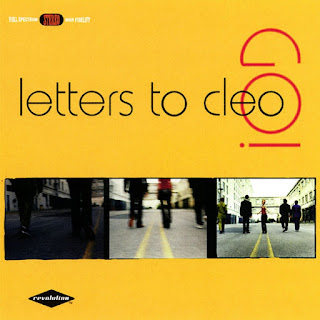 Been in a bit of a '90s lookback mode of late. My recent trek through women-helmed alt.rock for my imaginary Yellowjackets soundtrack found me listening to some old Letters to Cleo records, and it turns out I still like 'em just fine. I've written previously about my guilty-pleasure love of frontwoman Kay Hanley's efforts on the super-fun Josie & The Pussycats soundtrack, but her original band still holds up for me as well.

I knew them mostly through 1994's debut Aurora Gory Alice and its hit single "Here & Now," but on re-listen I kinda dug their third (and final proper) LP, 1997's Go! It finds a fun middle ground between edgier guitar-driven pop-punk and sweeter power pop, finding common ground with artists like Juliana Hatfield and That Dog. Sure, it's all very very nineties-sounding, but Hanley remains a magnetic centerpiece, sounding a little bitter on some of the lyrics but backed by compelling hooks. Opener "I Got Time" is energetic and far more skewed than standard indie power pop; the title track is rollicking and riveting; "Sparklegirl" perfectly matches bad-girl edge with bubblegum infectiousness; "I'm A Fool" is a lyrically pointed mid-tempo rocker.

Audio rip of the title track: