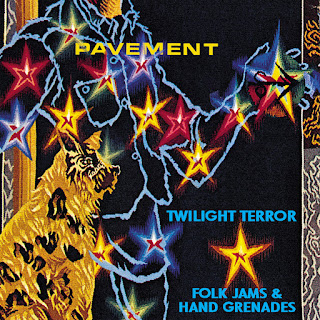 I've always felt some ambivalence towards Pavement's final record, Terror Twilight. As I've previously kvelled, their 1992 debut was truly life-changing for me, while the three that followed were pretty great. But this one was... well, a mixed bag. There were a few stellar tunes that warranted inclusion in the Pavement canon--obviously catchy singles "Spit on a Stranger" and "Carrot Rope," and enjoyable deeper cuts "Folk Jam" and "Major Leagues." But some of the balance made less of an impact on me, and a few tracks I simply didn't like at all. Frontman Stephen Malkmus continued the trend from prior albums of stepping back from the hook-laden yet skewed immediacy that made me fall in love with them, increasingly relying on the slow-burning guitar jams that characterized a lot of his subsequent post-Pavement work. And the album was entirely free of contributions from guitarist Scott Kannberg--sure, he wasn't the songwriter or vocalist that Malkmus was, but his tunes had the sense of fun, and the engaging hooks, that were sometimes absent from Malkmus' more serious tracks.

Of course, this was also the band's break-up record. The demise of the band that pretty much defined the '90s for me, inseparably intertwined with the onset of my adult life, was emotionally rough (however obvious it was from arc of their recordings and live performances that it was probably time), so it's always been impossible for me to hear Terror Twilight objectively and without a twinge of sadness.

Still, the recent release of a new expanded edition gives me an excuse to revisit it and, as is the case with their other albums, to recreate my own personalized, imaginary version of the record. 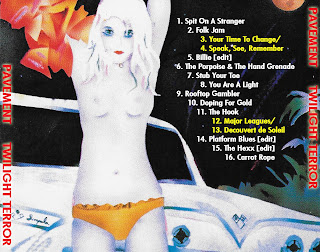 Alas, there's less to work with this time. For their prior two albums, Wowee Zowee and Brighten the Corners, the band had a wealth of excess material, a number of upbeat, poppy tunes relegated to b-sides and EPs, so it was easy to swap out some of the weaker LP tracks and create alternative tracklists that I ultimately found a lot more satisfying. Here, aside from some demos and early takes (which the band correctly shelved once they brought uber-producer Nigel Godrich onboard), the only additional studio tracks are a few b-sides and some tunes from the band's swan-song EP. Still, while these outtakes aren't necessarily great, they're catchier than some of the LP cuts (and include some Kannberg numbers). So I dropped a few LP tracks entirely in favor of the bonus material, while editing some songs into shorter excerpts. (Despite being loved by some fans, I've never been crazy about "The Hexx" or "Platform Blues," at least in their studio incarnations, but knocking a few minutes off their running times makes the record much tighter; "Billie" also gets edited down.) I also segued a few tunes together into interesting medleys.

I mixed things up by wedging in a pair of post-breakup solo tunes. The Twilight reissue includes one fun new outtake, "Be The Hook," a skeletal tune that later formed the basis for "The Hook" on Malkmus' solo debut; the unfinished outtake isn't quite ready for prime time, so I went with the solo track instead. And to keep things even, I included "Doping For Gold" from Kannberg's band Preston School of Industry. I'm not sure it totally works, but at least for me including them takes away some of Terror Twilight's emotional baggage.

And I gotta say, overall I'm enjoying my new version more than the original.

The Spotify recreation of the mix below isn't quite as cool as my homemade CDR, since I don't have the ability to edit/merge tracks; I'm happy to share my version if anyone's interested. Meanwhile, you can buy the new reissue on Bandcamp or Pavement's Matador Records page.