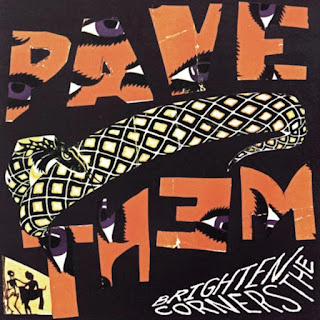 Sure, I've already chatted up Pavement a few times in this space; hell, I've got a whole chapter in my book dedicated to how Pavement changed my life back in the 90s. But with the band gearing up for another reunion tour, their first in a decade--just got my tickets, see you at the Masonic next September!--I'm firmly back in Pavement mode today.

When Brighten the Corners first came out, I greeted it with a sigh of relief. I had found the preceding album, Wowee Zowee, a bit of a sprawling mess, and Corners was a return to the more concise consistency of 1994's Crooked Rain, though there were some bits I found rather dull (and still do). Since that time, I've come around on Wowee, or at least my personalized, reconfigured version of the album that substitutes in some superior b-sides for the album's weaker tracks; I consider that album (or my version of it) at least as good as Crooked Rain, perhaps even better. Which reduces some of the "Pavement is back" relief I felt upon hearing Corners back in the day and undercuts it, just a bit, as a successor to Wowee.

Still, it's a fine album, and at least half of it is a great reminder of the delirious joy Pavement brought to my life (while making for a slightly more user-friendly introduction to the band for those less welcoming of the early work's edginess). "Stereo" and "Embassy Row" (or at least the second half of the latter, once they pass the draggy intro) recapture the kinetic magic that first won me over, jagged post-punk guitar rock and Stephen Malkmus' wicked absurdism in full display. "Shady Lane" is perfect, skewed pop. "Transport Is Arranged," "Type Slowly," and "Starlings of the Slipstream" highlight Malkmus' growing skills as a balladeer, mid-tempo songs that remain engaging, if a bit meandering, thanks to catchy, melodic hooks and the flashes of lyrical brilliance. And guitarist Scott Kannberg/Spiral Stairs lends a couple of his best tracks to date, the Byrdsy jangle of "Date With Ikea" and the Fall-like hypnotic psychedelic churn of "Passat Dream."

Some of the album's balance I find a little tougher to get into, Malkmus' lyrics losing their grip when tethered to music that could be either unengaging or grating, though even the weakest tunes ("Blue Hawaiian," "Fin") are still ok in moderation.

As with Wowee, the band inexplicably left some of its catchiest tracks for b-sides. "Harness Your Hopes" (which later found some unexpected online popularity) and "Slowly Typed" (an amped-up remake of "Type Slowly") are peak Pavement; "Westie Can Drum" and Kannberg's "Winner Of The.." are also pretty great. You can find all these and more on the later deluxe edition, which, as I did with Wowee, can be used to create an alternate, catchier version of the album.

...and "Shady Lane":...and outtake "Harness Your Hopes":Got some time? Here's an entire concert from 1997, running through a good chunk of the album (with great sound quality):