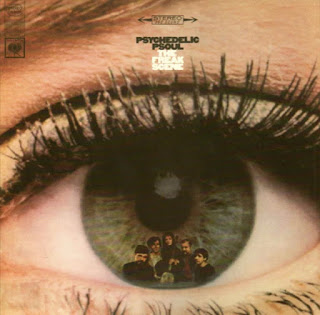 Been awhile since I've visited the Rightfully Obscure Psychedelia™ shelf in my collection (figuratively speaking; it's all digital, the shelves are loooooong gone from my home...). Thought I'd throw this one out there as another example of silly, badly-dated fun that's nonetheless good for a spin.

The Freak Scene were an American one-off psyche band (well, kind of a two-off; a different iteration of the band, called The Deep, released a 1966 album similarly entitled Psychedelic Moods). Whereas Moods was rougher sounding garage rock, Psoul went all-in on the psychedelic touchstones of the era--some raga sitars, speaker-bouncing stereo effects, phased guitars, spoken-word peace & love proclamations, etc. Rather than extended trippy explorations, most of the songs are relatively concise, with spoken-sung vocals. Occasionally they'll get off an almost radio-friendly pop song ("Behind The Mind," which sounds like the calculated faux-psychedelia of the Hair musical), and a few tracks are pretty respectable late 60s garage psych nuggets worthy of inclusion on retrospective box sets ("A Million Grains Of Sand"), but for the most part they go for deliberate weirdness, somewhere between the West Coast Pop Art Experimental Band and more eccentric acts like Lothar & The Hand People.

Yes, there's a reason albums like this slip into obscurity; it's not exactly timeless music. But throw on some headphones, help yourself to your favorite chemical enhancement, and it makes for an amusing half hour.

Audio rip of "A Million Grains":