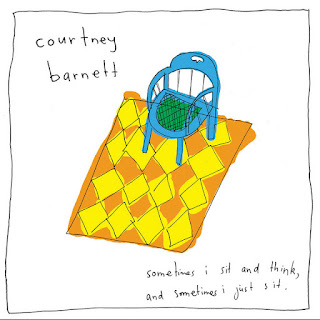 I've been listening to the great new Courtney Barnett album, Things Take Time, Take Time, since its release last week, enjoying it a lot, but it's also a good excuse to revisit her prior releases. Which has served as a helpful reminder of just how much I love her 2015 debut, Sometimes I Sit And Think, And Sometimes I Just Sit. Actually, it was only sort of her debut--her two prior EPs were later combined onto a single album, and that one sounds more like a proper debut, terrific but still a bit tentative, whereas Sometimes explodes with a surprising level of confidence for a soft-spoken singer-songwriter, seemingly the work of a far more established artist.

Barnett comes across like your quirky friend who majored in Poetry with a Philosophy minor, wandering around the city all day with a thick notebook, furiously scribbling down her every observation and personal reflection. She sings these free-flowing stories in a wickedly beguiling yet conversational tone, half marveling at what's before her with child-like wonder, half totally aloof and jaded, with her distinctive Australian accent giving even the most joyfully banal denizens of her neighborhood a dramatic spin. Of course, that might make for a record best suited for sitting on the couch with the lyric sheet rather than an entertaining listening experience, had she not put together an adept pick-up band and tethered her words to a varied musical palette.

Stylistically, the music ranges from the wispy Americana of the incredible "Depreston," an entrancing piece about suburban home shopping, to the punk-ish frenzy of "Pedestrian At Best," an acid-tongued personal confession of sorts. Most falls somewhere in between, like the straight upbeat pop-rock of "Elevator Operator," with its high-rise people-watching, and "Aqua Profunda," a more modest view from the local pool, and especially the super-catchy "Debbie Downer." (Alas, it trails off a bit with the more downbeat tunes that close out the record, reinforcing how much her musings are assisted by a punchy rock backdrop.)

It's one of the more fascinating debuts of the past decade; you can pick it up at Bandcamp, as well as the rest of her catalog.