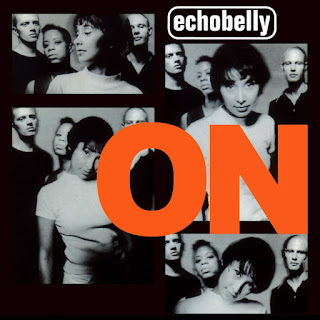 As noted previously, I didn't pay much attention to Britpop during its mid-90s heights. I was firmly in US indie mode at the time, busy with Yo La Tengo and Pavement and Guided by Voices and Sleater-Kinney and Liz Phair and Luna and so on. Obviously a few of the more successful bands penetrated the US radio market, bands like Oasis and, to a lesser extent, Blur and Pulp, but some of the more peripheral acts (at least in the US) never hit my radar screen.

Anyway, last week I was on a bit of a Britpop kick and decided to delve in and track down some bands/albums I'd missed at the time. I particularly enjoyed On, the second LP from Echobelly. It's a more rocking, guitar-driven album than other acts I associate with the genre, and between its rousing rock tunes and Sonya Madan's vocals, they remind me a bit of Elastica (which did get some traction here in the States at the time, though I viewed them as more an alt.rock band that happened to be from the UK than a "Britpop" band). Songs like "King Of The Kerb" and "Great Things" are totally killer, sounding fresh and rambunctious today despite some of the tell-tale sonics of the era.

Anyway, check it out if you, like me, missed it on the first go-round.

Meanwhile, at the end of my deep-dive I put together a 2-CD Britpop mix, mostly bands associated with the movement, with a pretty clear line back to the Beatles through the Jam; as well as a few bands which may not be thought of the same genre-wise but fit in well on the mix. I stuck exclusively to 90s releases, and tried to avoid songs I more associate with the Manchester dance scene (Happy Mondays) and shoegaze. I think it came out pretty great; check in out below.