Weezer For Beginners (A Mix) 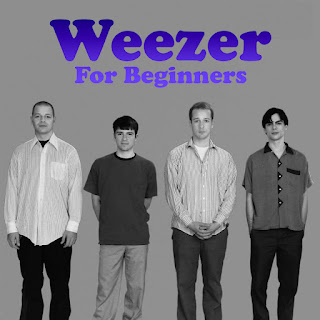 Weezer make me feel old. Mainly because I'm perpetually confused about what the cool kids think of them. Am I supposed to legit like Weezer? To like them, but only ironically? To straight-up hate them? No clue. I get the sense there is a universe out there with formal rules governing what Weezer albums are deemed cool and uncool, when you're supposed to appreciate River Cuomo's perpetual middle-school mindset or mock it, and I'm not privy to those rules.

Personally, rock nerd expectations aside, I'm pretty mixed on them. I can't say there are any Weezer albums I'd actually listen to, except maybe the first, the blue one, because that's the only one I actually bought upon its 1994 release, something that was played nonstop on alternative rock radio, like Green Day, which was a perfectly acceptable mainstream concession back then. After that, I'd hear the occasional new single on the radio (particularly when I still had kids growing up at home), and periodically spin through a few albums to see if there was anything else I liked. But play an entire album? Nah, not really.

But that doesn't mean that the single-CD mix I made of obvious hits (and a few deep cuts) doesn't kick all sorts of ass. There's no denying the power pop splendor of a few top choices ("Say It Ain't So," "El Scorcho," "Don't Let Go," "Dope Nose"). And sure, a few of the singles are pretty bad--"Beverly Hills" is irredeemably god-awful, and "Pork & Beans" comes close--but even those make for smile-inducing guilty pleasures when played alongside the other hits.

It's kinda weird that they've never released a Greatest Hits album, as it would be a monster smash; but maybe they recognize that nobody would bother buying the original LPs if such a shortcut existed. Kinda like AC/DC, I suppose. (I would never in a million years make it through an entire AC/DC record, but I made a compilation of Bon Scott-era tracks [the only era I can bear] and it's similarly awe-inspiring.)

Anyway, here's my personal mix, which may win over a couple converts, or just make me look like an out-of-touch dork. I really don't know.

Oh, and in case you like my Spotify single-artist mixes, I've got a few dozen of them posted on my website. More on the way when I get around to it.