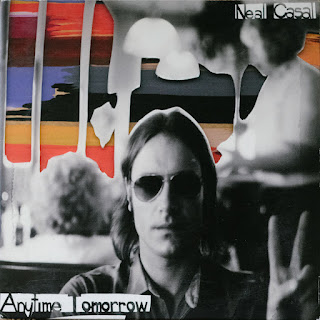 I'll admit I came pretty late to the music of Neal Casal, the Americana singer-songwriter (and ridiculously busy hired gun guitarist) who tragically passed away two years ago. And I am kicking myself, because his back catalog is pretty damn stunning. His ten solo albums released 1995-2011 are almost ridiculously consistent, not a bum note in the batch, blending Gram Parsons and the Jayhawks and Ryan Adams; they vary a bit stylistically, their balance between stripped-down country twang and singer-songwriter balladry and more upbeat rock shifting from record to record, but really, it's pretty damn hard to single one out.

Before getting into his solo work, I knew Casal largely through his work with folks ranging from Ryan Adams to psyche-country rockers Beachwood Sparks and several of their offshoots. Indeed, my favorite Casal-related project was Circles Around The Sun, written about previously in this space, where a pick-up band recorded music to be played during setbreaks at the Grateful Dead's 50th Anniversary concerts. That music, a blend of Dead riffs repurposed into gently trippy instrumental muzak, sounds little like Casal's own work (though it's wonderful).

While Casal has a few anthologies which work as fine introductions to his solo work, I'd personally recommend Anytime Tomorrow. It's kind of a cheat, as the record largely forgoes hist more intimate country-tinged early stylings for straight-up country rock and pop, a radio-ready brew that should've catapulted him into the mainstream. But its uncharacteristic immediacy doesn't make it any less great. And Casal's beautiful vocals never fail to captivate.

Opener "Willow Jane" is a rousing rock tune that establishes out of the gate a more radio-friendly tone than his prior work, followed by the terrific "Fell On Hard Times," a perfect slice of earnest countrified pop. Country-rock pervades a few other tracks, like "Sweetvine" (calling to mind the Stones' "Loving Cup"), the Crazy Horse-tinged "Eddy & Diamonds," and the epic "Raining Straight Down." "Oceanview" almost veers into mildly psychedelic mid-tempo power pop, like a great lost Matthew Sweet track (which may explain the Sweet-like photo on the record cover). The ballads are more firmly in gentle singer-songwriter territory than twang, the gorgeous "Just Getting By" almost hitting some Fleetwood Mac notes.

It's a great album, and a smooth entry into the oeuvre of a musician with a tremendous body of work waiting for discovery.

...and a video for "Eddy & Diamonds":...and a solo acoustic performance of "Fell On Hard Times":How about a complete live gig from 2004, offering a bunch of tunes from the album?