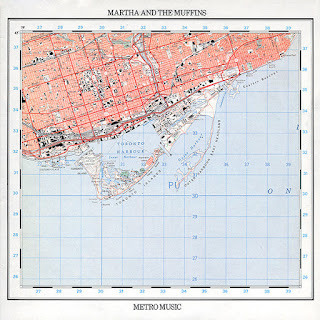 Inspired by the recent release of an outtakes/rarities collection, I flipped through some of my old Martha And The Muffins records from back in the day. The Canadian band were one of the more original acts of the new wave era, though they've continued to intermittently regroup for new music over the ensuing decades. Their 1980 debut is out of print and doesn't stream, which is a shame, as it's a pretty cool little gem. They veered from guitar-driven new wave pop to artsier, jagged post-punk experimentalism (think Pylon, Slits, or Altered Images) abetted by synths & saxophone. There was also a strain of more pastoral folk-pop that reminds me of Feelies-adjacent band Speed The Plough.

The debut included the closest thing they ever had to a timeless hit, the wonderful "Echo Beach," understated, hypnotic guitar jangle and slithery keyboards highlighted by vocalist Martha Johnson's office-drudgery lyrics and infectious chorus hook, like a much less happy Go-Go's song (with sax!). There are other off-kilter near-pop tunes, like "Paint By Number Heart" and "Revenge (Against The World)," but much of the balance avoids obvious pop hooks in favor of more challenging, edgy art-rock that would dominate later releases, like the jarring, punk-tinged (punk as in Wire, not Pistols) "Monotone." Some holds up better than others, but overall it's an interesting document of the times.

The entire album was later re-released on the Far Away In Time compilation, joined by a few tracks from the next couple albums. (Alas, that doesn't stream, either.) Most of the album has been ripped to YouTube.

Here's a live take on "Monotone":Here's an audio rip of "Paint By Number Heart":...and an audio rip of "Revenge":
File Under: 1980s Indie Rock Martha And The Muffins New Wave Women Who Rock