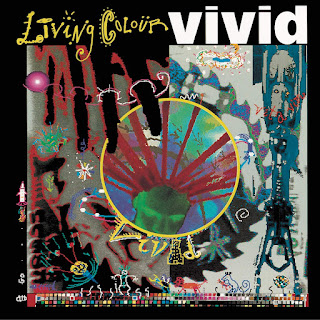 You know those albums that will forever be fixed in time? Music you associate with a particular moment in your life, yet rarely (if ever) revisit down the road? For me, Living Colour's 1988 debut fits in that box--a record that seemed to loom larger than life at the time, yet I can't say I've played it more than a couple times in the ensuing three decades.

When the social director of my college eating club (yeah, the term sounds ridiculous, but that's what we called the clubs at my school where most parties were held) invited Living Colour to play a party for us in '87, well before their first album, they definitely stood out. Most of our parties featured college radio jangly guitar bands like the Connells and Love Tractor, or fun, party-friendly, under-the-radar acts like Scruffy the Cat or the Ben Vaughn Combo. Plus, let's be honest, we were an East Coast Ivy League school, and most of the music we listened to was pretty damn white. (Repeat visitors Fishbone were the rare exception.)

So Living Colour stood out. Not just as a quartet of almost supernaturally charismatic black dudes with eye-popping over-the-top day-glo high-fashion outfits, but for their music, a riveting amalgam of hard rock and funk and pop. Mostly, they stood out as just a better band than most. Vernon Reid's guitar-playing was Hendrix-level ridiculous, something that midway through the first song in their set made it obvious these guys were gonna be huge. Pooled with a frenetic yet tight rhythm section, Living Colour were on a whole different level than most the music we were into at the time, the casual ease of R.E.M. and shambling recklessness of the Replacements. And the songs, most of which comprise this debut, were just great.

You had obviously political, racially-conscious songs like "Open Letter To A Landlord" and "Which Way To America" mixed in among lighter pop songs like "Glamour Boys" and more traditional R&B like "I Want To Know" and the edgy hard rock of "Cult of Personality." All of it was given a semi-metallic sheen, Aerosmith riffs and a shared post-punk hard rock sensibility with Guns N' Roses, who were catching on around the same time. Plus they threw in some ringers, like a fantastic cover of Talking Heads' "Memories Can't Wait," guaranteed to attract those of us in the college radio crowd who might've dismissed them as a little too mainstream-ready. (The CD reissue also includes a nifty cover of the Clash's "Should I Stay Or Should I Go," a song that feels more intended to draw in dubious white kids than playing to the band's music strengths.)

When the album came out some months after we first heard them, it was a surprising treat. The energy of the live set wasn't lost (even with a few signs of 80s music production, and maybe not quite capturing Reid's genius as a shredder); the songs were great and varied. There was really something for everyone, so it wasn't surprising that we played the hell out of it on the college station, while it also became a massive commercial hit and briefly an MTV mainstay.

Listening to it now, I do wonder why I have so infrequently revisited it since then (and never spent any time with their subsequent releases). It still transports me back to senior year of college, a nice nostalgic vibe, and it's not as badly dated as I might expect, the songs holding up well (and that "Memories Can't Wait" cover still absolutely rips). Huh. Hard to say. Maybe it's just one of those things where my memories of the impact of the record of the time are so fixed that actually listening to it seems secondary.

Here's the "Cult of Personality" video: