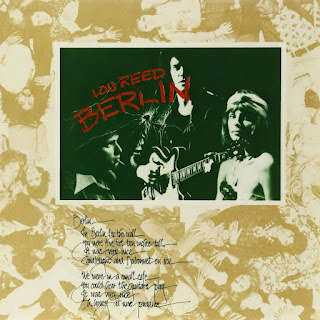 I always knew one day I'd have to take on Berlin. It's no easy task, as it's easily the most divisive album in Reed's long history (yes, more than Metal Machine Music, where I'm convinced anyone who claims to love it is just trolling). Not to mention that it's an incredibly difficult listen. But I dusted it off this morning for the first time in a few years and, yes, I'm still firmly in the camp that loves this record (even if I still only want to dust it off once every few years).

Berlin was Lou's third album after leaving the Velvet Underground. His self-titled 1972 debut was pretty straightforward classic rock (underrated IMHO, though the subsequent unearthing of the previously-unreleased and superior Velvets versions of most of the songs rendered it largely moot); Transformer later that year was his huge Bowie-abetted glam record, establishing Reed as a viable solo artist with tracks like "Walk On The Wild Side," "Vicious," and "Satellite of Love." But with Berlin, Reed presented the motif that would endure throughout his life, constantly confounding fan expectations with music that refused to capitalize on past success.

To say Berlin is a dark record is an understatement. It's gut-wrenching and harrowing, a concept album of sorts focused on a couple enmeshed in drugs, abuse, and ultimately suicide. You don't sell a lot of records writing songs about having kids taken away by social workers, you know? Musically, the record largely forgoes Reed's guitar-driven rock sound from his Velvets days and prior solo releases; it's largely piano-based, with some acoustic guitar, blown up to sweeping proportions with symphonic orchestration from producer Bob Ezrin--who would later do the same with Pink Floyd's The Wall. And like The Wall, another album I still respect and adore even if I only give it the occasional spin, it's bombastic and occasionally punishing, yet still gives some good songs room to shine.

And, fine, nobody is putting "The Bed" and "The Kids" on their party mixtapes. But some of the tunes are pretty great, not entirely grueling, and work even outside the record's thematic context. "Caroline Says I" is as close as the album gets to rocking out, sounding more in line with Transformer, and "How Do You Think It Feels" is comparable. And "Caroline Says II," while thoroughly downbeat, is also gorgeous and infectious (though a bit of a ringer as a reworking of the then-still-unreleased VU classic "Stephanie Says").

The theatricality and darkness of the album can be a slog, and I certainly understand some fans' disdain (it was pretty much savaged by the critics upon its release); but I do think it rises above its reputation and with some distance is quite an accomplishment.

Here's an audio rip (with lyrics) of "Caroline Says I":

While the critical response put the kibbosh on Reed/Ezrin's plans for a theatrical production at the time, Reed finally put it together decades later, captured on a live recording:

Finally, as part of my series of imaginary soundtracks to non-existent films, I made a mix a few years back that blends the darkness of Berlin with other glam-leaning, bluesy, or otherwise foreboding cinematic selections; I think it came out pretty great--close your eyes and you can write the script in your head: 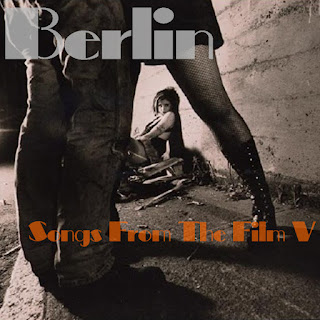 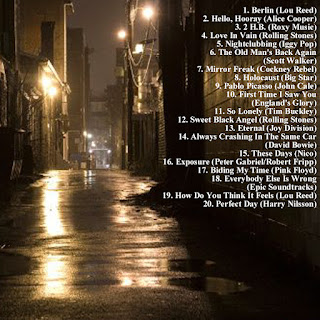