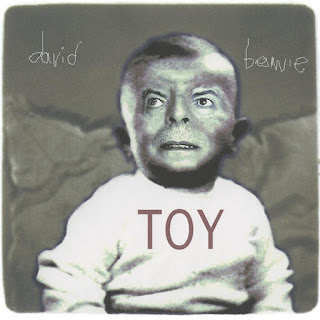 Ahem. Anyway, while this is not exactly a Great Lost Classic, it's still nice to see a Bowie album recorded back in 2001 finally get a belated (official) release twenty years later. His record company at the time, not entirely without some justification, opted to shelve the album, though it leaked out online, and a few tracks showed up as b-sides; it's now officially available as part of his latest box set retrospective, Brilliant Adventure (1992-2001). It's also slated for a deluxe stand-alone release next year, appended with alternate versions.

As a musical work, it's a not-entirely-successful experiment that works more as an interesting curiosity for long-time fans than as an essential piece of the vast Bowie discography, but, still, I like it well enough.

Bowie first recorded Toy in 2001, between Hours and Heathen. With a couple exceptions, the songs are reworked reinterpretations of his commercially unsuccessful '60s recordings, predating his "Space Oddity" breakthrough. One could compare it to 1973's Pin Ups, only instead of covering classic British Invasion bands like the Who, Kinks, and Pretty Things, Bowie is covering Bowie. The result is both better and worse than Pin Ups. Sonically and musically, the album sounds terrific, capturing Bowie's late 90s return to glory, making it eminently more listenable today than Pin Ups, where the glam-era bombast hasn't necessarily aged well.

However, the album is ultimately only as good as the songs--and there's a reason Bowie's '60s work isn't held in the highest esteem. The songs, ranging from his earliest R&B-tinged freakbeat singles to his late 60s twee pop tunes, just ain't that great--catchy enough, but lyrically unsophisticated (certainly compared to what followed) and just kinda workmanlike. Now, as a lover of Bowie's work going on 40 years, I enjoy his early stuff just fine, spinning it up on the rare occasion to mix things up, but it's not exactly in the same league as his post-Hunky Dory work.

All that said, it's worth checking out for Bowie fans. Some of the upbeat ditties like "I Dig Everything" "You've Got A Habit Of Leaving," "Let Me Sleep Behind You," and the Creation/Who-like "Can't Help Thinking About Me" are great fun, the new arrangements simply amping up the original light-hearted pop. "Karma Man" is a silly kick. But the slower pieces are a little more iffy, the serious musical treatment a mismatch with the lightweight material. The sole new song on the collection, the title track, is... fine, but kinda odd in this context. (A few other new songs, as well as some additional 60s reworkings, were included on the version that previously leaked online but are for some reason omitted on the new box set; they'll apparently be included in next year's expanded edition.)

As for that ungodly cover art... I opted to use some artwork that circulated with the prior bootleg release when I added this to my digital library, 'cuz ugh. 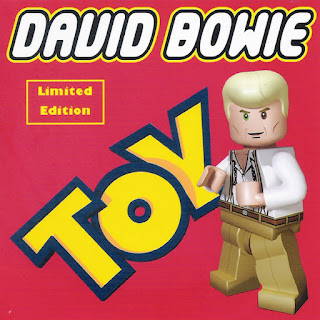 Here's a video for "Habit":And here's a live performance of "Can't Help Thinking About Me" from 1999:You can stream this as part of the Brilliant Adventure box; but someone has helpfully posted a Spotify playlist of this disc alone: